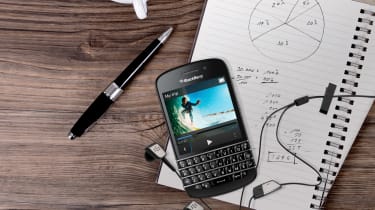 The Q10 is powered by a 1.5GHz dual-core Snapdragon processor alongside 2GB of RAM and 16GB of internal storage. You also get 32GB of additional space via the SD-slot (and it is possible to format it to except 64GB cards).

It also packs in the largest battery we've seen so far inside a BlackBerry: 2100mAh. NFC, 4G connectivity, Bluetooth 4, and dual-band Wi-Fi, as well as HDMI-out, are all included out the box, bringing BlackBerry well and truly back in line with the competition.

There are no performance issues. Flick around the interface and you'll experience zero lag, with everything flowing smoothly. During our two weeks with the device we've yet to encounter a crash, freeze, or been forced to reboot the handset.

Multitasking sits at the heart of BB10 and the UI has been designed with it in mind. Based around three key gestures, navigating around BB10 is a simple and intuitive experience. You have the Hub on your left, app icons to the right, and the multitasking window in the middle.

Looking like a combination of iOS and Android, it seems like BlackBerry has taken elements from both, implemented plenty of its own ideas, and come up with something entirely different but simple enough for even a complete beginner to pick up.

There is something of a learning curve, of course, but it shouldn't take you longer than a couple of hours to figure everything out. Read our in-depth look at BlackBerry 10 here for more information about the ins-and-outs of the operating system and the software features.

There are over 100,000 apps available inside BlackBerry World, which isn't bad when you consider the platform is four months old. Around 20 per cent of these are said to be Android ports and performance, which in our experience, isn't always great.

BlackBerry is still a long way behind Apple and Google in this regard, and if you're coming over from either platform you will notice the difference. That said, apps built specially for BB10 The Guardian, USA Today, The New York Times, Foursquare, and CrackBerry look amazing, showing just what's possible with BlackBerry's new SDK when it's in the right hands. 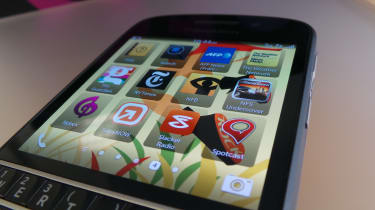 Most of Google's apps, Dropbox, Chrome, Firefox, Instagram, Spotify, Pixlr, YouTube, and Tumblr are some of the key applications missing from BlackBerry World. New content most recently Skype and WhatsApp is landing everyday, however, so in this respect we are pretty confident that BB10 within the next year or so will have pretty much everything covered.

Gaining market traction and getting big name publishers on to your platform takes time, just look at Windows Phone, but it seems that BlackBerry is making all the right moves in this regard with its more open, developer-friendly, approach to its platform.