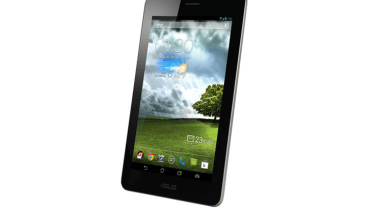 The built-in 3G functionality is a real boon for this device, particularly as you're not paying extra to get it. There's also the aforementioned micro USB, Bluetooth, GPS and Wi-Fi.

Wi-Fi is something of a sore spot, in fact that's an understatement - it's the Achilles heels of the whole tablet. We found our Wi-Fi connectivity hampered by problems which only seemed to affect the Fonepad.

Our device wasn't dropping connections because we could still see a Wi-Fi icon with a decent set of bars. But, notifications would pop up telling us the connection was poor, websites would fail to load and web-dependent apps would be unable to sync with their servers. Other devices on the same networks, mobile or otherwise, had no such issues.

Asus is looking into the issue and this could just be a case of a fault in our review unit. We have been promised another sample, so we will update the review with out findings.

We found the processor performance in actual use to pleasing, offering smooth control and navigation overall. There were a few hiccups every now and then with multitasking and the occasional screen transition snag, but nothing too serious.

It's worth noting we tried the Fonepad with both the Asus UI and with Holo launcher HD. While both interfaces experienced the same slight performance hiccups, on the whole we found there was an improvement switching to Holo. Consistently with the Asus UI we found the pinch gesture to bring up homescreen previews would lag and this didn't occur at all on Holo.

The Fonepad is powered by an Intel Atom Z2420 single-core chip clocked at 1.2GHz with 1GB of RAM and a PowerVR SGX540 graphics processing unit (GPU). In GeekBench, processor and memory test, the Fonepad scored a total of 1,319, not quite as high as the older the Nexus 7 (1,494).

The Sunspider test faired poorly as well, with the Fonepad taking 2025ms to load a webpage compared to 1799ms for the Nexus 7.

The battery pack is rated at 4,270mAh and Asus quotes 9 hours of continued usage. We found gave around a day and a half of moderate-to-heavy use with Wi-Fi, Smart Saving mode and Auto brightness. However, using the 3G connectivity is going to reduce this to one of usage. Oddly enough putting the brightness on full didn't have a significant impact on battery life.

Onboard storage is 16GB which does give you a bit of room to play with, but there's also micro SD capability for cards up to 32GB so, users with larger capacity needs and a requirement for flexibility are catered for.

The Fonepad is good value for money. The storage provided is enough to work with and you have the flexibility of card expansion, but at the same time this isn't a high-capacity device.

Performance for the most part is decent, but the display is a let down. Battery life is reasonable and with normal use you can expect to get a decent amount of runtime from a single charge.

Normally to get a 3G capable 7in tablet such as this you'd either have to pay a lot more money (the 3G Nexus 7 costs  239, though you do get 32GB onboard too) or try your luck with some less well-known brands.

The Fonepad is a well-made device, but not quite capable as serving as a replacement for both a phone and tablet. At the moment we would lean towards opting for one of Samsung's Galaxy Note models, if you want a hybrid smartphone/tablet device.

The Asus Fonepad is good value for money considering its a a tablet which makes phone calls, but it is likely to be too cumbersome for most people.