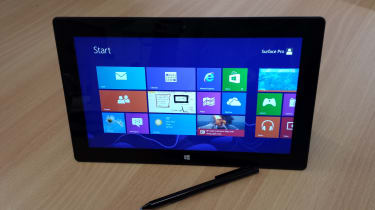 Microsoft has belatedly released the Surface Pro in the UK, seven months after the launch of Windows 8. But with a plethora of devices from established OEMs such as Dell and Lenovo available, is it wise to invest in a hybrid made by a firm with no pedigree in hardware?

Positioned as an Ultrabook which can be transformed into a tablet, the Surface Pro sounds like the ideal device on paper. It's powered by a meaty Intel Core i5 dual-core processor pegged at 1.7GHz, has 110GB of usable storage space, a beautiful screen and the build quality is good.

However, there is one core design flaw.

The Pro has the same kickstand found on the Surface RT. You pop this out when using the tablet on a flat surface so it doesn't fall over. The hinge is not adjustable, which is annoying. But when in the office, you can connect the device to a larger monitor using the built-in miniDisplay port.

The real problems starts when you want to use the device on the move. If you're at an event or on the train and need to use the tablet on your lap, the Surface Pro is awkward to use. When using the Surface during a press conference I spent the first 10 minutes worrying it was going to tip off my lap and cartwheel onto the floor. Every keystroke resulted in the 910g chassis wobbling and after a few minutes, when the fear of falling subsided, another problem emerged.

Use the Pro on your lap for any prolonged amount of time and you'll find the kickstand digs into your thighs and starts to cause discomfort. This is quickly alleviated by re-adjusting the position, but then you'll have to start the balancing act again. It's a tiresome process and I was craving an Ultrabook by the time my two hour event finished. I was even envious of the person on my right who had his iPad slotted into the keyboard dock and was happily tapping away.

Microsoft doesn't supply a keyboard with the Pro, so you'll need to purchase one separately.

There are two choices. The Touch Cover (99) or the Type Cover (109) which aims to provide a traditional typing experience. Both function as a screen protector when the device is not in use.

Adjusting to the cramped conditions of the Pro keyboards takes a while, especially if you're used to a large laptop or keyboard. The letters on the Type Cover are well laid out, but the arrow and enter keys are condensed and can be hard to hit. The Touch Cover takes longer to get used to as the keys are pressure sensitive and there is no give. 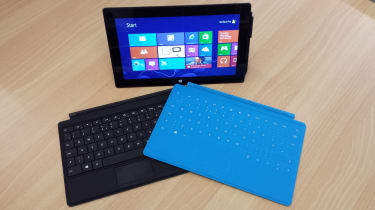 The trackpad is inadequate. It's a measly 66mm x 34mm so there's not much room to operate and it can be sticky too. The ability to tap the touchscreen does alleviate some of the shortcomings of the trackpad and you can also plug in a Bluetooth mouse in the office.