With up to 7 hours of talk time, ease of use and great audio, this is a good business headset. 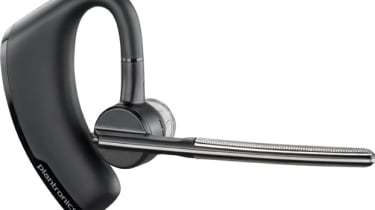 Plantronics' Voyager Legend Bluetooth headset claims to be much more than just a regular headset. The firm is pitching the accessory as the go-to attachment for conducting voice-over-IP calls on the PC or mobile.

Plantronics supplies a carry case that doubles as a charging dock for the Voyager Legend, while providing a place to store the the USB Bluetooth adaptor. The firm supplies a power cable that magnetically attaches to the headset should users not want to slip it into the case for charging, though it is hard to see why road warriors wouldn't just stick to the case. 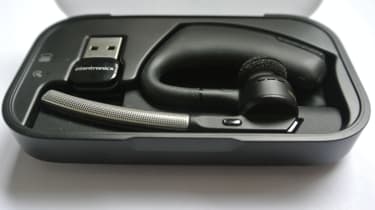 As for the device itself, Plantronics states the Voyager Legend has three microphones on a boom that swivels from the ear bud. The device has a nice weight (18g) to it which is noticeable at first, though after a few hours of use it does what all good headsets should do, seemingly vanish.

Plantronics has not only made the microphone boom pivot on the ear bud but the over ear attachment can swivel. This allows users to wear the Voyager Legend on left or right ear lobes. The microphone boom has a limited range of motion once on the ear, though it had little negative effect on microphone pick-up in our testing. 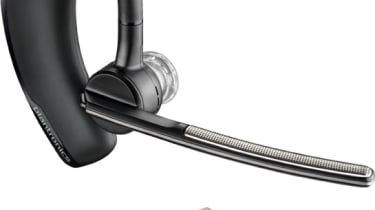 With the inclusion of three microphones, we had high hopes for the sound quality and we weren't disappointed. The Voyager Legend worked very well in an office environment with moderate background noise and it fares equally as well in a crowded room, though it does struggle in windy conditions.

The Voyager Legend's earpiece volume was a bit low for our tastes and would be a problem in areas with loud background noise. That is not to say Plantronics hasn't done a good job with the sonic quality of the speaker on the unit, but we found ourselves nudging the volume rocker switch on the back of the ear piece many times in the hope that the speaker could shout at us just a little bit louder.

Plantronics has recognised it needed to put more than just good audio quality into the Voyager Legend to justify the high price. Therefore the headset includes the ability to transfer calls to the headset or the smartphone by simply placing the headset on the user's ear or taking it off.

This this sounds magical and prone to failure, but Plantronics has implemented it in such a manner than it actually works well. We tested the feature over a period of three weeks on dozens of calls and recorded less than a handful of failures.

While Plantronics does have a couple of Android apps for its headsets, the MyHeadset app greets Voyager Legend users with a warning that it does not fully support the device at this time, which is disappointing for a device that tops the firm's product range. What Plantronics' MyHeadset app does provide is a voice recorder and a permanent notification of the headset's battery life, the latter of which is particularly useful.

The second Plantronics app is InstantMeeting, an ambitious application that combines calendaring with the ability to automatically join conference calls for those that never want to take their Voyager Legend off their ear. While Plantronics' ambition in creating this application is welcome, in order to work seamlessly it needs too many ducks to be in a row, such as a supported conference call service and additional information if the app user is the person hosting the call.

Plantronics claims the Voyager Legend can provide up to seven hours of battery life when in constant use and this stacked up during testing. If you plan on going into a lengthy conference call and don't have much battery left, you can always plug in the charger if you're near a socket too.

Plantronics' Voyager Legend is a premium Bluetooth headset that commands a high price tag. The firm has tried hard to justify the device asking 100 and for those that use a Bluetooth headset as an plastic extension of their head then we think Plantronics has done enough to earn your cash.

The Voyager Legend has excellent audio, with the only downside the volume being limited to slightly less than we would have liked. Ergonomically, Plantronics offer ear buds for small and large ear canals and the device has physical characteristics that soon blend away.

Plantronics' decision to supply a USB Bluetooth adaptor, a charging dock that becomes a carry case and the ability for the Voyager Legend to pick and up and transfer calls by simply attaching or putting down the handset are the standout feature. As a package, the Voyager Legend is top bit of handsfree kit for the business person on the go.

A pricey headset, but well worth every penny if you use it regularly. The Voyager Legend is compact, comfortable and will work with every device you have thanks to the Bluetooth dongle supplied.