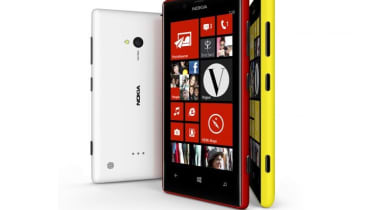 Nokia's Lumia 720 is a mid-range marvel. The handset takes the best bits from the Finnish firm's high-end Lumia models such as the camera and squeezes it into a smaller, affordable form factor. But is the Windows 8 device worth the investment?

Our review unit came in a vibrant shade of fire-engine red and was comfortable to hold thanks to its lightweight (128g)  and thin case (9mm). But it was also solid thanks to its unibody construction. The plastic isn't quite up there with the Lumia 920's premium polycarbonate but it's still on a level way above much of the competition and which is also rather gratifying at this price point.

Nokia has taken the same approach the Romans took when building forts, by keeping all exterior features identical to its other models. This gives the 720 a familiar look and feel to users who may have handled a Windows Phone handset. Along the right-hand side you'll find all the physical control keys - a volume rocker towards the top, a power button below that, near the centre, and, because this is a decent camera phone, a dedicated shutter button towards the bottom. All have a satisfying level of feedback to them and both power and volume controls are easily accessed when holding the phone in either hand. 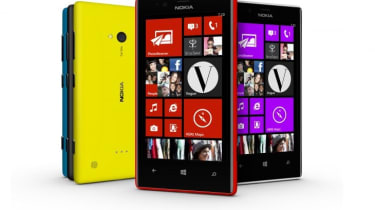 On the bottom edge is the micro USB port, helpfully situated for those of us who like using charging docks so that it stands the right way up, and on the top there's a 3.5mm audio jack. There are also two pop-out trays operated with a key (or paper clip) for SIM and micro SD cards.

Where the excellent bodywork ends an admirable display picks up the baton. It's a 4.3in IPS LCD with an 800 x 480 pixel resolution at 217 pixels-per-inch (ppi) which produces sharp, clear visuals and boasts impressive brightness and viewing angles.

Colours are rich without being oversaturated and while Nokia's ClearBlack layer helps with creating better image quality, overall black depth isn't the best we've seen from the manufacturer. This is due to the ClearBlack and Amoled being combined. In terms of contrast and black depth it is still very good for an LCD, while whites are particularly vivid.

We found the screen was well suited to outdoor use, though you will get reflections, the brightness levels and colour does show through enough that you can actually do things with it in bright sunlight. The display also supports super-sensitive touch, meaning you can use it with gloves.