With a 10in screen and touted 10 hours of battery life can the Ativ 3 kickstart Windows 8 adoption. 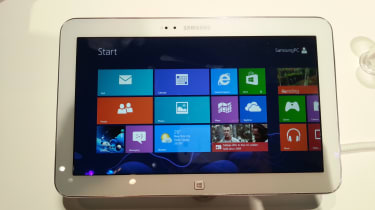 Samsung has reaped the rewards of devices running the Android platform, and the Korean giant is looking to transition this success to products running Windows 8.

The Ativ 3 is the device tasked with kickstarting adoption of Windows 8 tablets. From afar the device looks similar in size to the Google Nexus 7 and Apple iPad mini. On closer inspection, you realise the Ativ has a 10in form factor. Pick up the glossy white tablet though and you'll be left wondering if the battery is inside because it weighs just 550g (without the cover). That's lighter than the iPad 4 (652g), which has a smaller 9.7in form factor. 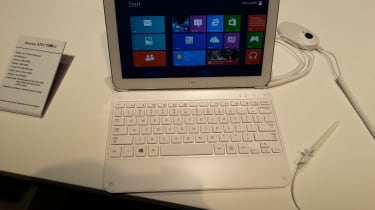 The jury is out on the performance levels, however. Samsung has chosen Intel's dual-core Atom SoC Z2760processor and 2GB RAM. This is the same specification that was used in the Asus VivoTab Smart, for which performance levels turned out to be disappointing.

On the plus side the Ativ 3 should still be able to handle web browsing and multimedia content comfortably. The use of the low powered system-on-chip Atom processor also means that the tablet should be able to get close to the touted 10 hours of battery life.

Aside from the processor, there are another couple of areas where Samsung hasn't used the highest specification likely a necessity to keep the cost of the product down. The 1366 x 768 resolution is disappointing, especially as other similar sized tablets such as the Google Nexus 10 (2560 x 1600) and Apple iPad 4 (2048 x 1536) have better.

Internal memory is also pegged at just 64GB - but the inclusion of a micro SD card slot helps to extend this. Other useful ports include micro HDMI and micro USB connections.

The cover accessory also looks like an area where Samsung has made giant steps. It doubles as a keyboard and looks like one of the best around for tablets. The keys have the same travel you would expect from a regular laptop keyboard.

Unfortunately Samsung is yet to announce pricing but again it should be comparable to the VivoTab, which ships for around the 375 mark. IT Pro will bring you a full review in the coming weeks. 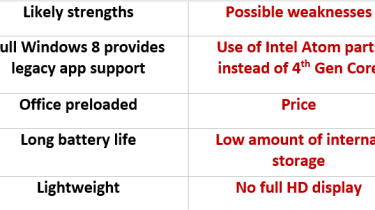