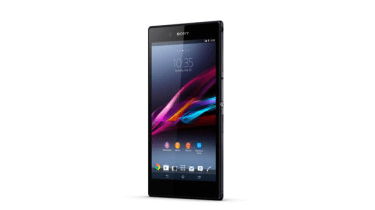 Sony unveiled a massive 6.5in smartphone in central London today, with early benchmarks revealing it to be the fastest smartphone on the planet.

Dubbed the Xperia Z Ultra, Sony's latest handset shows the Japanese firm is hungry to be a smartphone heavyweight. With the Ultra, Sony is dabbling in Samsung Galaxy Note territory. The large 6.5in display means the Ultra will act as a hybrid smartphone/tablet.

The first thing you'll notice about the Ultra is the size. It's huge. But the 212g weight combined with the wafer 6.5mm thick chassis makes it easy to pick up and hold.

Continuing the trend started by the Xperia Z smartphone, Sony has got the Ultra certified as waterproof and dust resistant with an IP55/IP58 rating. The firm has also added in a magnetic charger on the side so users won't always have to lift up the flap to access the micro USB port. However, the magnetic charging cable/dock will be an optional extra and not included in the box. 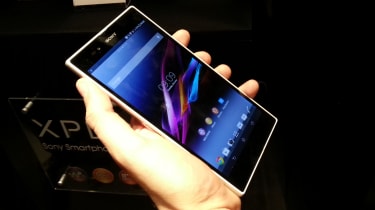 Both the front and back are still made from glass and there's lots of it here. Sony is yet to confirm whether the device uses the same mix of Dragontail for the front and Corning Gorilla Glass for the back as it did for the Xperia Z. Although the samples we handled felt robust, we still wouldn't want to drop it. 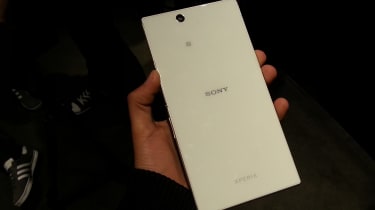 The sheer size of the display means it is the most recognisable part. The technology packed inside the panel could also mean it may be the best mobile screen on the planet.

The 6.44in display packs a full HD 1920 x 1080 resolution, but that's not all. There are two key features Sony has ported over from its Bravia TV range the Triluminos colour technology and X-Reality engine.

The Triluminos technology allows the display to show a large spectrum of colours which can be picked up by the human-eye. This provides more vibrant and realistic colour replication for images, according to Sony.

However, it's the X-Reality engine which looks to set the device apart from the competition. This analyses low-res pictures and videos on screen and sharpens them up by automatically adding in missing pixels. The next time you download a low quality video from YouTube, the Ultra will be able to boost the quality to near-HD level. When you've got HD content to play from the start, the results appear outstanding. 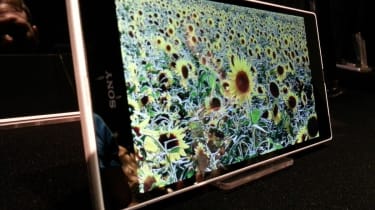 In terms of productivity, Sony claims users can use any pen, pencil or stylus for input although ballpoints are not recommended. In our brief test this claim appeared to stack up.

The Ultra will be the first device to ship with Qualcomm's Snapdragon 800 processor, according to Sony, when it launches in September. This could be a massive coup for the Japanese manufacturer especially as the 2.2GHz quad-core processor looks set to provide a massive performance boost which hasn't been seen in the last two cycles of smartphones.

Sony's Xperia Z Ultra blitzed through two commonly used benchmarks we tested. The Qualcomm powered device left every other smartphone for dust in the Sunspider Javascript test with a phenomenal page loading score of 400ms. To put it into perspective this is twice the speed of Samsung's Galaxy S4 (800ms) which runs on the 1.9GHz quad-core Qualcomm chip. The Xperia Ultra even recorded a faster result than the S4 which uses Samsung's Octa-core processor (679 ms).

Results in the Peacekeeper browser test weren't quite so mindblowing but a score of 861 puts the device behind only the iPad and iPhone 5.

Even if the Ultra isn't the "fastest" in terms of benchmarks when it is released later in the year, we envisage users will have no complaints about performance. Transitions between applications and homescreen are faultless. Playing resource hungry content such as multimedia or games won't prove a problem either.

For some users the Xperia Z Ultra's 6.4in screen will be too big but Sony is confident that there is a market out there for a device to double as smartphone and small tablet. Samsung has also proved this with the success of its Galaxy Note range.

The only other issues aside from size could be the price, which is unconfirmed, and the battery life. Sony has packed in a 3000mAh pack, which is sealed into the glass casing. Despite Sony claiming that its Stamina mode will help the device power through the day, the full HD 6.4in display is likely to chew through the battery. We will see when we subject the device to our real-world testing and in our full review.