Good battery life and accessories a plenty for this rugged Windows tablet, but the ElitePad 900 suffers from middling performance. 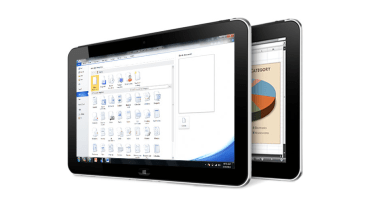 HP's ElitePad 900 aims to catch the eyes of CIOs and IT managers looking to deploy a tablet that can be managed as easily as a PC. The Windows 8 device also sets out to offer end-users a robust chassis sits in-between the ruggedised Panasonic ToughPad and the delicate iPad.

Not so pleased would be the road warriors who have to use it though. Its performance doesn't quite match that of an iPad or one of the multiple high-end Android devices available.

Starting at 547, the ElitePad 900 sports an Intel Atom processor at its heart. While this means you get the full-strength Windows operating system running atop of it (rather than the lack-lustre Windows RT an OS only Microsoft could love), the Atom chip means that performance is that of a netbook sans keyboard.

The 1.8GHz Intel Atom Z2760 processor is supported by 2GB of RAM and up to 64GB of storage in the form of an SSD. Our test model had 64GB, which it needs as the OS appears to take up a lot of space. HP has also included features such as BIOS Protection and LANDesk to make it attractive for enterprise deployment.

Externally, the styling is iPad-like with brushed aluminium and a black bezel around the screen but with added black plastic to ensure enough clear water between the two design-wise. There are volume buttons and a rotational lock and display lock. At 261 x 178 x 9.2mm the tablet is not as wide as the full-sized iPad but a tad longer. There is no questioning that the tablet feels sturdy enough for most business uses.

On its own, the ElitePad 900 has little in the way of I/O ports. There is simply a docking connector, reminiscent of the old-style iPad and iPod connectors, and a headphone jack. Hidden away under a tiny pin-open panel are also a micro SD card slot and SIM card slot for mobile broadband. The SD card slot will be needed to ensure for future storage needs given have much space is taken up with the OS. 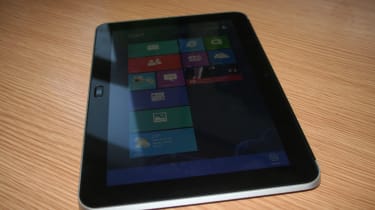 The ElitePad is usable with one hand but you'll feel the weight of the 680g chassis after long periods, more so when teamed with the expansion jacket and its extra battery. The build quality is stand-out. The brushed aluminium and Gorilla Glass looks the part business-wise. The display delivers a resolution of 1280 x 800 pixels, lower than a lot of other Windows tablets and far below the 2048 x 1536 of the latest Apple iPad Retina display. The resolution is below the minimum required for Windows 8's Snap feature, so running two Metro apps at the same time appears to be out of the question. 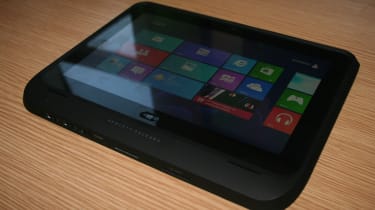 Optional expansion comes in the form of a set of "jackets". There is an Expansion Jacket that comes with HDMI and USB ports, plus room for an extra battery, and a docking station, sporting multiple video and data ports. In time this will be added to with what HP calls a "Productivity Jacket" which is a keyboard case with adjustable screen angles.