Updated: Apple has announced two successors to the iPhone 5: the iPhone 5s and iPhone 5c. 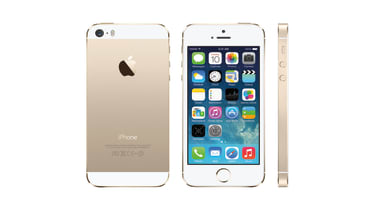 Apple's iPhone 5C and iPhone 5S devices have gone on sale in 11 countries today including China, US and the UK.

The launch of the latest iPhones follows the release of iO7, which was made available to download on the 18 September and is compatible with the iPhone 4 and above. Apple is expected to sell several million devices in the opening three days.

It's better than the iPhone 5.

The iPhone 5c is the cheaper of the two devices, and comes in a choice of colours including light green, orange, yellow, blue and white and shares a lot of the same features with Apple's current flagship device, the iPhone 5.

For example, it boasts a 4in retina display, and is powered by the same A6 processor, although it reportedly has a larger battery capacity.

The outer casing has a plastic-type effect, although Apple was quick to assure those with any qualms about the build quality that it's made from a hard-coated polycarbonate that is steel-reinforced inside.

Speaking at the event, which took place at Apple's Cupertino HQ, the firm's SVP of design Jony Ive said the 5c is "beautifully, unapologetically plastic," but insisted it would still feel as good to hold as the firm's more upmarket devices.

The firm described its product as the "most forward thinking phone" Apple has ever created.

This was a point backed by Ive, who said the device is the "most refined iPhone to date" because it is "meticiously designed, engineered and crafted".

"It's the remarkable innovation inside the iPhone 5s that sets a new precedent. It's not just rampant technology's sake - every single component, every process has been considered and measured to make sure that it's truly useful and that it actually enhances the user's experience," he added.

The device will be powered by a 64-bit A7 processor, which Phil Schiller, Apple's senior vice president of worldwide marketing, hailed as world first for the smartphone market.

He also confirmed the device will continue to run 32-bit apps, and that iOS 7 will support 64-bit ones, too.

Schiller said the device can clock up 250 hours without charge on standby, and that the battery can sustain eight hours web browsing time over 3G networks, and 10 hours on LTE and Wi-Fi.

As for talk time, Apple quoted a battery life of 10 hours over 3G. "It's better than the iPhone 5," added Schiller.

Based on the keynote's content, the 5s seems the more business-friendly of the two devices, given that it includes a fingerprint scanner, as many industry watchers had predicted, to help make it easier for users to lockdown their devices.

The feature, dubbed Touch ID, relies on users pressing on the device's reworked home button, which features a detector around the perimeter of the button, that unlocks the device when the user's fingerprint comes into contact with it.

Apple claims the feature works with any finger orientation, and will encourage more users to secure their devices, after it was claimed onstage that less than half of smartphone users bother to lockdown their devices with passcodes.

design, assured users that all their fingerprint information would be encrypted. "[It will be] stored inside the secure enclave in our new A7 chip. Here, it is locked away from everything else, accessible only by the Touch ID sensor.

"It's never available to other software, and never stored on Apple servers or backed up to iCloud," he added.

Other enhancements include a reworked 8MP camera, which features a newly designed lens and sensor that reportedly provides a 15 per cent larger active area, because as Schiller explained "bigger pixels make a better picture."

The camera will take pictures for as long as iPhone 5s users hold down the camera button, and then the device will pick the best one. It also has the ability to capture 10 frames a second in burst mode.

For users that want to buy the device outright, Apple has confirmed the iPhone 5s will have a recommended retail price of 549, 629 and 709 for the 16GB, 32GB, and 64GB models, respectively.

The launch of the devices marks the end of the road for the iPhone 5, Apple confirmed, despite Apple CEO Tim Cook declaring that it had the most successful first year of any smartphone the firm has put out.

The iPhone 4S, however, will remain on sale for the time being.

In the run up to today's launch event, we took a guess at some of the features we thought might make an appearance on the new iPhone, so read on to see whether or not our predictions came true...