Updated: Can this pint-sized 4.3in Android handset capture the magic of the HTC One at a lower price point? 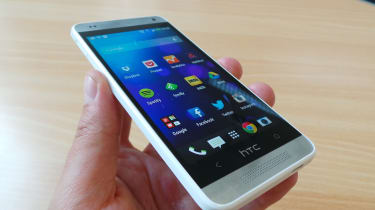 One sure fire way of keeping a handset's cost down is by chopping on-board storage, and that's exactly what HTC has done. The HTC One Mini is only available with 16GB of internal space (you get 11GB of usable space) and does not support microSD, so you've no way of expanding it.

For some 16GB will suffice, for power users it will be a problem. If you carry a lot of media around on-device this is something you may want to consider. Cloud storage can to ease the pain, but the lack of a micro SD is a big miss.

DLNA, Bluetooth 4.0, and Wi-Fi 802.11 a/b/g/n are all supported but HTC decided to omit NFC and the IR Blaster to keep the handset's overall proportions in check.

4G (LTE) is supported 800/1800/2600MHz along with HSPA+ and 3G. For  EE is your only option for 4G in the UK at present. O2 and Vodafone are expected to announce their respective 4G tariffs this quarter.

One of the more useful Android overlays, HTC's Sense 5 is quite a departure from the UI that featured aboard handsets like the HTC Desire and HTC One X. And for the most part it's a huge improvement being visually starker and a lot easier on the eye.

It does feel slightly convoluted compared to Google's stock Android layout but all the core functionality is in place. Folders are easily set up and you can add in as many homescreen as you desire. For legacy HTC users, however, the switch from three-button navigation (home, back, and settings) to two (Home and Back) might take some getting used to. 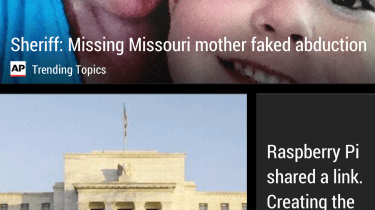 The One Mini's Settings menu is accessed by a two-finger drag down of the notifications bar, while a single-finger grab reveals messages and notifications. To access Google Now hold down the back key, and for the multitasking carousal it's a double tap.

The unmovable BlinkFeed is the only downside to Sense 5. The elephant in the room, BlinkFeed acts as your de facto homescreen and pulls all your social networks' updates, alongside HTC-selected news sources, into one place. We'd like BlinkFeed a lot more if it was optional, but unfortunately it's not  so you just have to work around it.

The HTC One Mini features the same UltraPixel imaging technology as the HTC One. Here you get an F2.0 aperture and 28mm lens plus an illuminated sensor for better results when shooting in the dark. Video is shot at 1080p, and there's a 1.6-megapixel front-facing camera for handling videos calls in 720p quality.

For the aspiring photographer it's an enviable setup offering a myriad of features, effects and editing attributes. You can shoot in HDR, add in Instagram-like effects, and even shoot Zoes whereby a collection of images are pieced together and played back as a short stop-frame animation style clip.

Images are detailed and sharp with excellent colour reproduction and while the camera does seem to struggle with auto-focus every now and then, the sheer number of features and added extras on show inside the One Mini's Camera app more than make up for its shortcomings in this regard.

Cutting down the battery was a necessary to allow the smaller form factor, but this is the weak point for the Mini.

The original HTC One used a reasonable, 2300mAh cell that delivered middling-to-decent results in our tests. It's no surprise then that the cut-down 1800mAh pack in the One Mini and the difference is substantial.

The handset consistently failed to make it through a normal day (10 hours) under normal usage. At a push and with the help of HTC's Power Saver feature you can eek more life out of it but you will lose features like push email in the process. To compound the problem the device is not interchangable.

With normal usage  a few hours of Spotify, push email turned on, an hour of Angry Birds, an hour of web browsing, and one hour's worth of calls you can pretty much guarantee the handset will be dead by 8pm (providing you're up and about by 7:30am, that is).

For businesses considering deploying Android handsets, or employees looking for BYOD options, the HTC One mini is a good option. The specifications and performance represent great value for money and this is the cheapest high-end Android handset available wit the exception of the Google Nexus 4.

The only problem we envisage is with updates. The latest versions of Android will take some time to appear on the One mini, as HTC will load on its Sense interface before offering it over the air. This could put off IT admins who want to make sure employee devices have the latest version of software ASAP after launch, and is an area where the iPhone has an advantage.

HTC nearly did the impossible here; it nearly distilled everything that made the HTC One so great into a smaller mid-tier handset. 90 percent of the HTC One's flaghship handset is here, and that's impressive. Our only wish was that the battery was better and it had expandable storage.

Aside from that the HTC One Mini is a very compelling proposition for anyone looking to get an Android handset with a palm friendly 4.3in display.