With an Intel Xeon processor and 32GB of RAM, this beast of a laptop outperforms most desktops. But it'll cost you £6,000. 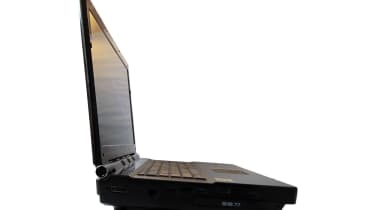 The 74mm-thick chassis and 5.5kg weight offer tank-like protection. The build quality on the Panther is excellent, with a rock-solid wrist-rest, sturdy base and a screen that barely flexed about what we'd expect, considering the screen itself is 13mm thick.

The right-hand side has two USB 2 ports, four audio jacks and a Kensington lock slot, and the left-hand edge houses a pair of USB 3 ports, FireWire, DVI-I, HDMI, DisplayPort and Gigabit Ethernet connections. An eSATA socket doubles as a third USB 3 port. The power plugs into the rear, and the front of the machine has status lights, an SD card reader and even a Smart Card slot something we've not seen on a laptop for years.

Unlike many Ultrabooks, much of the Panther's base isn't taken up by its battery most of the room inside this machine is dedicated to components. We removed the hefty bottom panel and revealed four 60mm fans. Two blow cold air across the chunky heatsink on top of the LGA 1155 processor socket an odd sight in a laptop and the other two cool the GPUs. They're easy to remove, and the wireless card, processor socket and memory slots are all accessible. 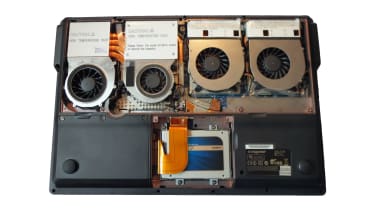 A smaller panel can be removed for access to the SSD and hard disk, with both stored in a 2.5in metal caddy. The battery is next door, takes up about one quarter of the base, and there's another 2.5in drive bay underneath.

The Panther 5D's rock-solid base means the keyboard is a pleasure to use: snappy typing, good resistance, and light keys. The trackpad is unfussy but similarly comfortable, and there's room for a number pad. We've only got one quibble, and it's the Return key we've no idea why it's single-height.

The speakers have ample volume and bass understandable given the five discrete units and a subwoofer. Quality is impressive, with bass that doesn't overpower the treble and mid-range.

The 17in diagonal features 1080p resolution and 3D capabilities, and it doesn't just impress on paper it's good in practice, too.

The measured brightness level of 409cd/m2 is scorching: better the screens in the Retina-equipped MacBook Pro and Dell's excellent Precision M6700 mobile workstation.

The Panther's contrast ratio of 753:1 is good, and falls between the Apple and Dell machines. The average Delta E of 4.6 again fell between the two rivals, and the gamma level of 2.2 isn't far from the ideal measurement of 2 which means rich, warm colours throughout.

The only disappointment is the black level of 0.53cd/m2. It's a little high, and it means that blacks aren't as deep as they could be, and it also causes the darkest shades to crush together slightly. Still, we're more than happy with this screen, which has the resolution and accuracy to be used for demanding graphical work.