iPhone 5c not as cheap as expected, but fingerprint scanner makes an appearance in the 5s. 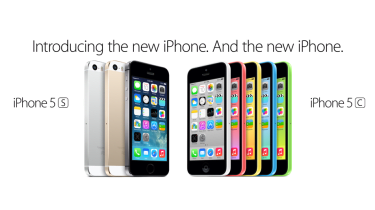 All the leaks leading up to the this year's iPhone launch proved to be accurate as Apple launched two smartphones at its annual event in the US the iPhone 5c and iPhone 5s.

As usual, the launch generated buzz around the world as Apple fans eagerly waited to find out what CEO Tim Cook and his team had been working on.

The iPhone 5c was expected to be a "cheap" handset, but the pricing unveiled wasn't budget. Apple revealed that the 16GB device would be available for an upfront fee of $99 (16GB) or $199 (32GB) if you take out a two-year contract. UK-specific contract pricing is yet to be announced but it can be expected to be similar to this.

Those hoping they would be able to snag a SIM-free iPhone 5c for a reasonable amount were left scratching their heads at the 469 starting price.

This high price shouldn't be too much of a surprise to those familiar with Apple. The firm has adopted a strategy to provide a premium experience across its product line, and it distances itself from the "budget" label at all costs.

With a 4in Retina Display, 8-megapixel camera, iOS 7 and 1080p recording capabilities, the iPhone 5c should have enough features to make it an attractive purchase for those who can't quite justify splashing out on the iPhone 5s.

The most interesting feature of the high-end iPhone 5s is the inclusion of a fingerprint scanner on the home button, which was predicted prior to the announcement.

Dubbed "Touch ID" this shows Apple is seriously trying to eliminate the need for traditional passwords. It's a brave move as fingerprint readers have been around for years and haven't yet been able to replace passwords on machines such as laptops.

However, Apple has previously had success in phasing out what it feels to be legacy technology. Cupertino was the first mainstream manufacturer to ditch optical drives from its MacBook and desktop products something other manufacturers only did when it was clear the world was ready for digital content.

For Touch ID to succeed the most important factor will be reliability. The system will be dependent on the durability of the sensor on the home button. If Apple can avoid teething problems, then it could be onto a winner, especially when it comes to attracting enterprise users.

Although the iPhone 5s is the more exciting of the two devices, ultimately the lower cost of the 5c could make it a more popular device. Whichever handset Apple fans opt for, come 20 September, there will no doubt be lengthy queues at Apple stores around the world.

Our resident News Editor, Caroline Donnelly wasn't too impressed with the iPhone 5c, but analysts were generally positive about the launch.

The iPhone 5c looks a little Fisher Price to me #iphone5

A lot of work went into the Touch ID sensor and rightly so as this has to work flawlessly not to put users off. #apple

the iPhone 5c is not as cheap as I thought after all but I believe it opens the window for a new era at Apple. Competitors should be worried

By introducing a new iPhone model, rather than re-purposing the iPhone 5, Apple is being more aggressive with its portfolio