The best 7in tablet on the market returns with upgrades galore, making it the ultimate travel companion. 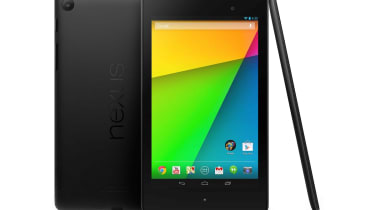 The internals get the inevitable upgrade too. Last year's Tegra 3 processor is replaced by a Qualcomm 1.5GHz, quad-core Snapdragon S4 Pro chip with an Adreno 320 graphics core. RAM is doubled to 2GB and this allows the 2013 edition to fly through benchmarks.

These benchmarks translate to smooth real-world use. There was no slowdown when navigating Android's menus or browsed web pages the flawless performance is helped by the absence of manufacturer-added software and skins and the ability to process smooth graphics. Despite the huge number of pixels pushed across that marvellous screen, Real Racing 3, Modern Combat 4 and Rayman: Jungle Run all ran without a hitch.

The slim line dimensions means the battery is reduced from 4,325mAh to 3,950mAh. With successive generations we usually see the battery get bigger, but there doesn't seem to be a downside to this. The Nexus lasted just under 12 hours in our video-looping benchmark better than last year's Nexus 7, which ran out of juice after nine hours, and an improvement on the iPad Mini's 11 hours 26mins longevity. 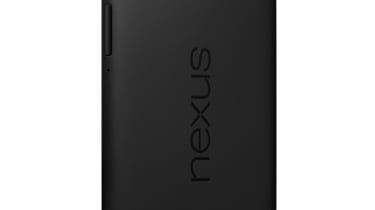 There's one area that tablets haven't had nailed, and it's audio. The new Nexus 7 has stereo speakers, and they're loud but not quite up to standard found on the HTC One smartphone.

The rest of the specification covers most of the bases: there's dual-band 802.11n Wi-Fi, Bluetooth 4.0, and NFC. The device comes with either 16GB or 32GB of storage space, and we'd opt for the latter of the two tablets so you can have more space to use the Nexus as a hard drive and  high-end movies and games are around 2GB in size, which means memory can be used up quickly.

Google has upgraded the original tablet's 1.2-megapixel camera to a 5-megapixel shooter. It's a big improvement, but it's still not going to trouble the best smartphones. Daylight snaps are decent but it struggles in low-light conditions images are too dark and noisy for our tastes.

The Nexus 7 lays down the gauntlet yet again. It boasts the industry's sharpest screen and oodles of power. The hard-wearing, good-looking chassis and price make it a better choice than the iPad Mini.

Google offeres the 16GB version for 199, and the 32GB model is 239. That compares well to the iPad, which costs between 269 and 429. It's also better value than rivals such as the Asus Fonepad and Barnes & Noble Nook HD while both of these are cheaper, they are not quite up there when it comes to performance.

Whilst the new Nexus is not the cheapest 7in device it's the best in the business in virtually every department. If you need a compact tablet, versatile tablet, this is the one to buy.

The Nexus 7’s screen bests every rival for pixel count and sheer quality. The components outstrip virtually everything out there – so performance is slick. The chassis is slimmer, lighter and more comfortable than before, and the 16GB and 32GB models cost less than £239. It'll also be first in line to get the Android 4.4 KitKat update.