Microsoft has refreshed the Surface Pro and RT, but is this enough to challenge Apple and Google? 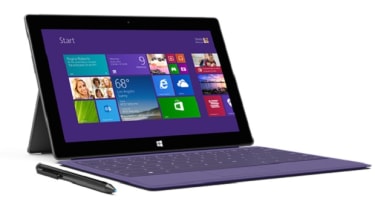 Microsoft announced its successors to the Surface range, but the firm has made only incremental upgrades to the products.

The first generation of devices failed to gain traction, but has the Redmond-based firm made enough improvements to turn things around?

Aimed at business users, the original Surface Pro was delayed for six months and even when it arrive it felt unfinished. Although it packed some innovative hardware, there were a few criticisms levelled at it including the inflexibility of the kickstand and poor battery life. Microsoft has addressed these, but it's still playing catch-up with its OEM partners, as well as Apple and Android.

The kickstand on the original only tilted out to 22 degrees and was a nightmare to use on anything other than a table. Microsoft has addressed this by introducing a dual-angle system, which should make the device more comfortable to use on your lap.

Microsoft claims that battery life has been improved by 60 per cent over the original tablet. This may seem staggering, but battery life on the predecessor was atrocious - we strugged to get to the five hour mark in our tests. It's Intel that should take most of the plaudits here, as the Haswell chips will make all the difference to longevity here.

Another feature introduced is the Power Cover, which includes a 30wH battery. This will help users to power through the day. But it's not going to be available until 2014, and pricing is unknown. It's another example of something which should have been included with the original product.

It's the value added services where Microsoft needs to make a play if it wants to challenge the popularity of the iOS and Android device. The firm is offering 200GB of free SkyDrive storage for two years, and free Skype calling to landlines in over 60 countries for one year.

However, Microsoft's failure to include accessories such as the Touch, Type or Power Cover in the asking price - which starts at a steep 720 - is why this product will probably fail. Users are going to have to fork out at least another 100 just to get the productivity benefits. When there are a range of Ultrabooks with equivalent or better specs, and which are upgradeable, it's hard to see why any IT admin would choose to deploy the Surface in their place.

Despite the original Surface proving to be monumental failure and burning a $900million hole in Microsoft's pocket, the Surface RT has been refreshed.

The hardware specifications were never the problem on the original RT they were high-end and Surface 2 improves on these  further. The 10.6in ClearType Full display is now full HD and the cameras are beefed up to 3.5-megapixel on the front camera and 5-megapixels on the rear camera.

Ironically for a firm that's built its business on software Microsoft managed to launch the most disappointing OS in 2012 Windows RT. This was an attempt to mimic the iOS and Android platform, which backfired horribly.

The negatives of the Surface RT far outweighed the positives. Microsoft had to embarrassingly include a desktop mode, the sole purpose of which was to open Office applications because the team had not developed a Metro app to deadline. The desktop couldn't run any other legacy apps due to the use of ARM chips instead of x86 architecture.

The Windows Store debuted with a 10,000 apps, but most were faff and the OS even lacked Microsoft's own applications, such as the Outlook RT app on launch. This rendered the productivity functionality to almost nil.

Microsoft appears to have improved the software side significantly with Windows RT 8.1 featuring unified search and multitasking, but the OS may never recover from the lame start. Panos Panay, vice president of Surface, touted the inclusion of 100,000 apps in the Windows Store - but most of these are not going to be quality apps.

Can Microsoft float to the Surface of the market?

Despite Panay's enthusiastic presentation, the answer appears to be negative. The Android and iOS ecosystem have an almost unassailable advantage over Windows RT. It's hard to see the Surface 2 ever being more than a niche product, particularly as it brings none of the benefits of full Windows.

Whilst the  Surface Pro offers considerably more functionality and is likely to provide high-end performance, we can't really see this being a successful business device either. The starting price of 720 and the inability to upgrade components is likely to render this dead-in-the-water.