Does the Retina Display on the Mini 2 outshine the 7in Nexus? 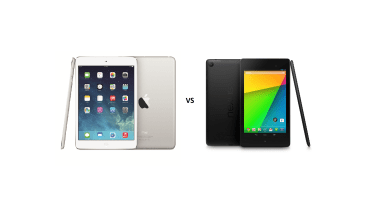 Apple has announced the iPad mini 2, which features the much sought after Retina Display and Apple's flagship A7 processor.

The iPad mini 2 will begin shipping in November and pricing for the 16GB Wi-Fi edition starts at 319. But does the iOS 7 tablet pack enough upgrades to challenge the Nexus 7 (2013)?  We break down the specifications of the two devices to see which offers the best value.

There is little to differentiate the devices in terms of app selection, wireless connectivity and battery life as well. The most striking difference comes in the storage department as the iPad is available with up to 128GB of on-board memory.

The price of the Nexus 7 (16GB) has dropped to 160, whereas the iPad mini with Retina Display still starts at 319. This indicates that a mid-year refresh is imminent.

New iPads are rolled out towards the end of the calendar year, which explains the lack of price drop at this time.

The inclusion of Retina Display in the iPad mini 2 has pushed up the price to 319, and this makes it 120 more than the equivalant Nexus 7 device. However, when it comes down to pixels-per-inch there is barely anything to separate the the two devices. See the full specs breakdown below: