Updated: The Surface Pro 2 improves on the original, but battery life and portability is still not good enough. 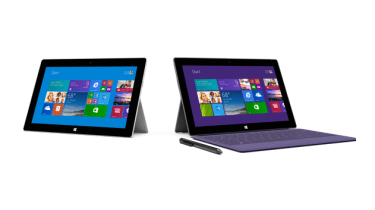 The Surface Pro 2 ships with improved software, battery life and a more flexible kickstand. But starting at 719 without a keyboard attachment, is this hybrid good value for mass deployment or is it a niche tool for boardroom executives?

Guest editor Mark Evans, head of IT at RLB says:

I'm sorry, Microsoft lovers. My background is foursquare Microsoft. I passed my MCSE on NT4, which obviously dates me and my company is still Microsoft throughout, however, I can't love the Surface Pro 2. It's too bulky as a tablet, uncomfortable to use and it absolutely needs the Type Cover to be usable as a laptop tool at an additional cost of 110, leaving a sour taste in the mouth.

The hardware specification is fine, but the execution of the Surface Pro 2 isn't compelling. Microsoft's entire Windows/tablet strategy seems so disconnected from what the corporate buyer is likely to consider. It's no wonder that corporates are staying with Windows 7 en masse, rather than Windows Vist Er Windows 8. The Surface Pro 2 in a word? Meh

All Surface Pro 2 devices ship with the full edition of Windows 8.1 Pro. This upgrade irons out numerous niggles present in the original release of Microsoft's operating system.

Key features include the ability to boot to desktop mode, carry out unified search by default, and there's also more control over multitasking and app resizing.

Place a Surface Pro 2 alongside the original and you'll struggle to see the difference. The second generation tablet retains the 10.6in full HD (1920 x 1080) display as its predecessor. Whilst this makes the tablet a great tool for viewing the Live Tile interface and multimedia content, it's not ideal for power users as text and icons appear tiny in the desktop mode. 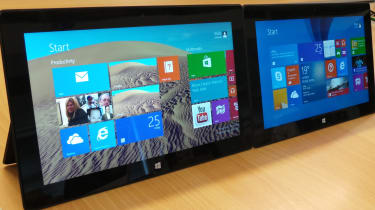 Microsoft has shaved off a meagre 3g from the chassis, so the Pro 2 remains a chunky device. The 907g weight and dimensions (274.5 x 173 x 13.46mm)showMicrosoft's inexperience as a hardware manufacturer. The Surface Pro 2 looks great but by comparison, Sony's larger 11in Vaio Pro Ultrabook weighs 870g, and Apple's smaller 9.7in iPad Air has a 469g chassis, which is almost half as thick (7.5mm).

Microsoft has tweaked the kickstand on the Surface Pro 2, allowing it to snap into two positions as opposed to one. This provides a better viewing angle when your using the device on a desk.

This adjustability is welcome, but the screen continues to lack the versatility found on Ultrabooks, especially business machines such as the Lenovo X1 Carbon which have the ability to rotate through 180 degrees. 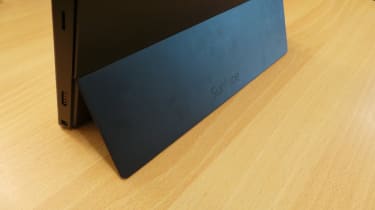 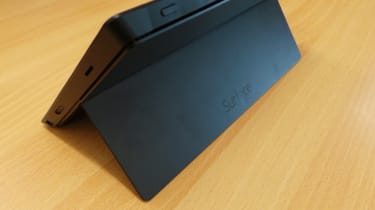 Using the Pro 2 on your lap isn't comfortable as the kickstand is sharp and can dig into your thighs. With the device retaining the same top-heavy design of the original, there is also the dangerit could backflip over your knees at any point.

Microsoft has trimmed 1mm off the second generation Touch Cover and added backlighting to the keys but the usability of the 100 accessory remains poor.

The original pressure sensitive keyboard wasn't comfortable to type on and it's been stiffened to the point where it's now akin to tapping on a piece of wood. The lack of bounce in the keys makes it difficult judge whether a press has registered on screen and even with practise you'll struggle to touch type. 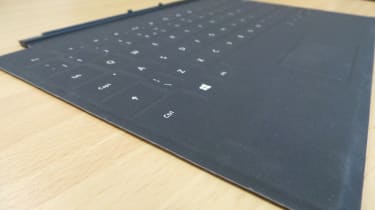 For those who want to use the Surface Pro 2 as a laptop replacement, the Type Cover 2 or Power Cover (which is includes another battery) are shaping up to be the must-have accessories.

Microsoft has not made them available for testing, so we can't report back on their performance yet. But if the Touch Cover 2 is available to buy now (110), but the Power Cover won't be released until 2014.

NB. This section has been updated to reflect the difference in battery life on the Surface Pro 2 after a firmware update was installed on the review unit. This provides a dramatic improvement to battery life. For the video playback test we looped a HD copy of Iron Man on the tablet. To test Wi-Fi browsing we used the resource heavy PeaceKeeper benchmark test - and this provides a worst case scenario.

Microsoft has kept the same 42Whr battery capacity as the original, relying on the efficiency improvements within Intel's Haswell architecture to boost longevity. 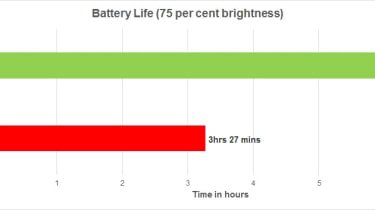 Like the design, the performance of the Surface Pro 2 is identical to the original as Intel's Haswell Core i5 4200U processor provides a minor boost in performance.

Our review sample shipped with 4GB of RAM but it is possible to get an 8GB as standard. Internal storage starts at 64GB and the maximum available is 512GB.

The Pro 2 scored a solid 0.62 in our overall benchmark test. This put the device through its paces by simulating tasks in commonly used programs such as Word/Excel, iTunes, Photoshop and Sony Vegas. It's only a marginal improvement over its predecessor (0.6), but the Pro 2 does pack more grunt than equivalent Windows tablets which run on the low-powered Atom architecture. 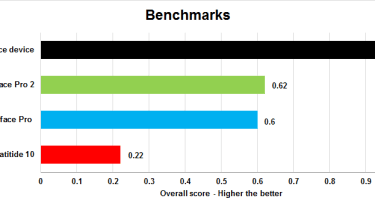 Ports remain the same the Pro 2 offers a solitary USB 3 connection, a micro SDXC card reader and Mini DisplayPort. There's also a proprietaryport where the Touch Cover accessories are slotted in.

The Surface Pro 2 isn't cheap, starting at 719 for the 64GB Wi-Fi only model. It may have more functionality than a pure tablet such as the iPad, but the equivalent 64GB Air starts at 559.

It's also hard to imagine anyone buying the Surface Pro 2 without the keyboard attachment because benefits are non-existent without it. This pushes up the cost of a device to at least 820 and we're not convinced this is a better alternative to an Ultrabook.

The Surface Pro 2 is an improvement over the original tablet, but it's got a way to go before it rendering Ultrabooks obsolete. Performance is solid but the Pro 2 is let down in the key areas of portability and battery life.

Microsoft has done little to address the upgradeability issues present on the original. IT admins are not going to be able to service these tablets which is something which should be factored into the purchasing decision.

When there are upgradable devices such as Dell Latitude 10 on the market and with Ultrabooks getting thinner and lighter with every generation it's hard to recommend the Surface Pro 2 for mass deployment.

The Surface Pro 2 is a capable machine, but not quite on par with OEM devices which offer better portability, battery life and serviceability.