Flagship Android KitKat 4.4 device goes on sale and we put it head-to-head with the iPhone 5s. 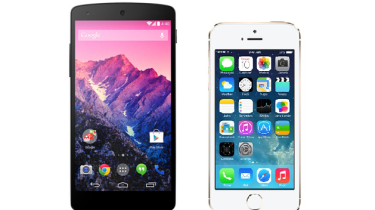 Google has launched the Nexus 5, which will be the first smartphone to run its refreshed Android KitKat 4.4 operating system.

SIM-free pricing start at 299 for the 16GB handset. This makes the device 230 cheaper than the equivalent SIM-free iPhone 5s (529) - although both are available for free on 24-month contracts starting at 32 per month.

The device is powered by a 2.3GHz Qualcomm Snapdragon 800 processor and is accompanied by 2GB of RAM.

If you're looking to buy a device SIM-free, the Nexus 5 represents outstanding value.

But if you're looking to buy on a contract, the decision is tougher. Both Android and iOS have over 1 million apps, and provide access to vast quantities of books, music, films and TV shows. So it will largely depend on whether you prefer Google's services such as Gmail, Drive and Maps or Apple's iCloud, Maps and Messages.