The latest Next Unit of Computing is a £300 pocket PC, but is it good enough to replace desktop PCs? 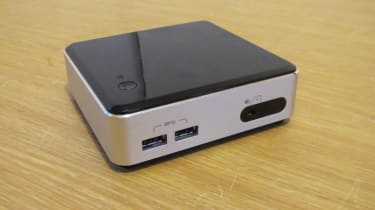 Intel's NUC machines arrived in 2012 to acclaim, and the chip manufacturer has refreshed the tiny PCs with high-performance Haswell chips.

The first generation boards lacked performance because of the embedded Core i3 and Celeron processors. The Ivy Bridge-based Core i5 model improved performance but port configurations weren't up to scratch. Has Intel got it right fourth time round?

Intel hasn't tinkered with the design of the NUC. The processor is soldered to the bottom of the board, and it's topped by a small heat-sink and a tiny fan. The underside of the PCB also houses the CMOS battery and the internal power button. 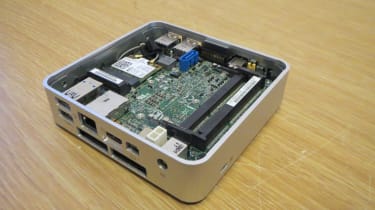 All the action happens at the top half of the board as this is where third-party components slot in. Storage is handled by mSATA SSDs, which fit into a full-height mini PCI-Express slot.

Underneath is a half-height mini PCI-Express slot for wireless cards two aerials are included in the NUC's case for dual-band cards. Memory goes inside a couple of SO-DIMM slots each one can accept up to 16GB of 1.35V DDR3L hardware. 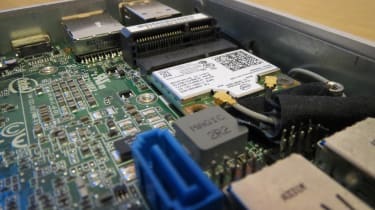 The biggest change to last year's board is the introduction of a SATA 6Gbps socket and its accompanying power connector. Elsewhere, there's a header capable of supporting two USB 2 connections, a front panel connector and a jumper to clear the CMOS perfect for resetting the EFI BIOS.

Intel's previous NUC boards had odd port configurations, but this year's models feature standardised selections. Four USB 3 ports are included and every board includes Gigabit Ethernet something not all SKUs had.

There's an infrared receiver for media centre use, and a Kensington lock slot. Display connectivity is handled by mini-DisplayPort and mini-HDMI. Intel doesn't includes any adapters in the box.

Intel's NUC boards are available as standalone motherboards and as barebone kits, where the board comes inside a case - like our sample kit (priced at 295). There's plenty to like about the NUC's diminutive chassis. It's aluminium chassis is sturdy and lightweight (well under 1kg), has a glossy black lid with a power button and a status light, and it's even managed to be a few millimetres shorter than the 2012 model.

It's easy to remove the board from the case, with just a couple of holding it in place. Third party cases compatible with the new board are also available.

When the standalone board hits the shops it should be 20 or 30 cheaper.

The NUC is a barebones unit, so performance depends on the components used. Our system was tested using 8GB of 1,600MHz DDR3L memory and an Intel 530 Series 180GB mSATA SSD.

The Haswell-based Core i5 processor delivered a modest application benchmark improvement over the Ivy Bridge-based Core i5 NUC. In our application tests the Haswell model returned an overall score of 61 slightly better than the 57 scored by the older model, on a par with mid-range Ultrabooks, but not able to match the 81 scored by AMD A10 series. 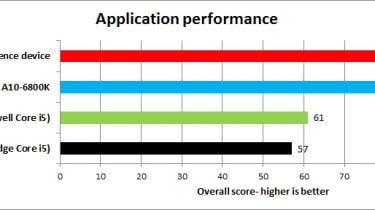 The new NUC's responsiveness result of 82 indicates the device is snappy during daily use. The multitasking result of 49 improves over first generation boards, which used Core i3 chips, and scored 37 in this important test.

The 2013 NUC's gaming ability took a larger leap forward. The NUC scored 62fps in the low-quality 1,366 x 768 Crysis benchmark, which easily beats the 46fps result of the older i5-based model. In Skyrim, we tested at 1,280 x 720 and Medium quality settings, and the new board averaged 36fps better than the 29fps of the older model. This machine won't just handle casual gaming, it's got the graphics power for day-to-day work, mid-range photo editing and HD video playback too.

The NUC provides a performance improvement and consumes less power than predecessors. It'idle and peak power draws of 9W and 24W are better than the 13W and 26W figures we recorded from last year's Ivy Bridge-based Core i5 system.

The system doesn't get too hot with a top temperature of 52C. But you will notice the high-pitched whine of the tiny fan in office environments.

The HD Graphics 5000 core's in Haswell outperforms the HD Graphics 4000 core included in last generation NUC models/ It's also designed to challenge AMD's APUs, which include processors and graphics cores. The A10-6800K is the top chip in this range, and it's going to be a tall order for Intel to catch up. 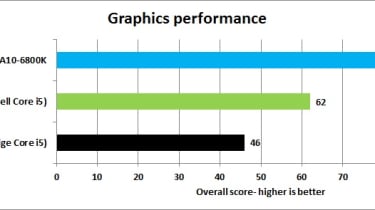 The new chip includes 40 improved stream processors clocked to between 200MHz and 1GHz. Last year's silicon ran at between 350MHz and 1.15GHz, but the older integrated GPUs included 16 cores. Overall, it's a leap forward.

The processing core uses the improved Haswell architecture, and the i5-4250U implemented here runs at 1.3GHz and uses Turbo Boost to hit a better peak of 2.6GHz. Its two cores are Hyper-Threaded, and it's got 3MB of L3 cache. The specification can trade blows with the 1.8GHz and 2.8GHz speeds of the i5-3427U included in the older i5-based NUC, and it also has a lower TDP 15W compared to 17W.

The NUC's tiny dimensions (117 x 112 x 35mm/907g) mean it can be used in a multitude of scenarios. It's powerful enough to function as a standard desktop system - and it can up to three monitors. The NUC kits include VESA mounts, so your PC could be mounted on the back of your monitor. It's worth looking at third-party cases too as you could get more ports than Intel's reference model.

Businesses can also use the NUC to drive digital displays or kiosks, it can power high-end vending machines. The lack of moving parts also means the NUC can be used in demanding environments where larger and more delicate PCs would suffer.

The fourth generation NUC improves on its predecessors in every area, with faster performance, lower power consumption inside the tiny chassis. It's cheaper than last year's model too: the previous model cost 308 for the board and kit.

Don't be fooled by the 295 low price. You need to buy memory, a wireless card, an mSATA SSD and potentially an OS. Also take a look at third-party rivals from companies like Gigabyte and Zotac, which offer similarly small systems for comparable prices.

The Haswell NUC is Intel's best small-form-factor machine to-date and it has a variety of useful business applications. But the cost can add up when using high-performance parts.