Computerised underwear may not be on the agenda, but wearable computing still offers plentiful opportunities. 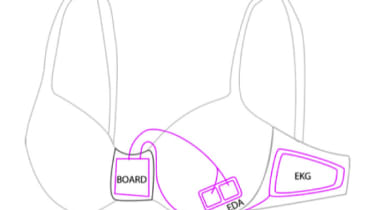 OPINION: What do you get if you cross tech researchers, ladies' underwear and the internet?

A great deal of overexcitement at least that's what Microsoft found out recently after designs for a "smart bra" some of its researchers had worked on were published earlier this month.

If there are two things the internet loves, it's kittens and boobs and the "smart bra" certainly caught the imagination so much so that Microsoft has been forced to issue a denial that it is actually developing such a device.

Microsoft Research, the department of the Redmond giant whose mandate is to "push the boundaries of computing," collaborated with the University of Rochester, New York, and the University of Southampton, UK, on a project to help reduce emotional eating in women.

The purpose of the research, which can be read in full here, was to come up with a way of detecting mood changes through wearable technology and use an app to help users react to and manage these mood changes in a way that didn't involve eating.

The researchers settled on a bra as they needed "a form factor that would be comfortable when worn for long durations ... [and] a way to gather both [ECG] and EDA (electrodermal activity) signals."

Well, if there are two things the internet loves, it's kittens and boobs and the "smart bra" certainly caught the imagination so much so that Microsoft has been forced to issue a denial that it is actually developing such a device.

"The bra sensing system is just one instance of a class of work from a group of Microsoft researchers who are focused on the broader topic of affective computing, or designing devices and services that are sensitive to people's moods and react accordingly," the company told NPR.

"While we will continue our research in affective computing, Microsoft has no plans to develop a bra with sensors."

So no diet-control bras from Redmond just now (the research paper indicates those involved were looking at moving to bracelets anyway, so men could participate too), but that doesn't mean an end to affective computing, also known as the quantified self movement.