With enhanced enterprise features is the latest HDX ready to tackle the business world? 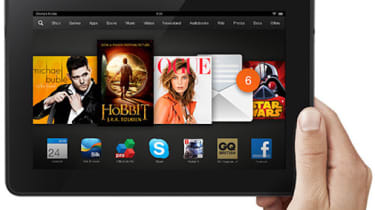 Amazon has been one of the few companies which has been able to compete with Apple's iPad range. The Kindle Fire HDX series has been revamped and the firm has been talking up the business credentials of the 8.9in model.

The HDX supports VPNs and IT admins can manage the device using third party tools from vendors including AirWatch, Citrix, Fiberlink, Good Technology and SOTI. But are these features enough to make it a deployable tool or a useful BYOD companion?

The Kindle Fire HDX 8.9in is portable, weighing in at 374g. Amazon has packed in an IPS LCD display with a 2560 x 1600 resolution and pixel density of 339ppi, matching the latest iPads and Nexus devices. Amazon claims this is one of the best tablets on the market for viewing video content and our tests go some way to backing this up. The display on the HDX outperforms the iPad Air with Amazon's tablet clocking a higher maximum brightness of 470cd/m2 and better contrast ratio of 1,244:1.

The HDX's entire back panel is constructed from magnesium and the chassis is 7.8mm thick making it easy to grip. It's also scratch resistant unlike Apple's aluminium-backed iPad Air, which is easily marked.

There are two physical buttons on the HDX - the power/unlock key and the volume rocker. Both are found on the back of the device and locating them takes getting used to, especially when holding the tablet in portrait mode.

The placement of the speakers, physical keys and the Amazon logo indicate this tablet was designed with landscape use in mind. It works fine in portrait but the keys are hard to locate.

Connections include a headphone jack and microUSB charging port. There is no SD card support so you'll have to make do with on-board allowance and supplement it with cloud services.

The HDX is powered by a 2.2GHz Snapdragon 800 quad-core CPU with 2GB of RAM and Qualcomm's bespoke Adreno 330 GPU. You'll find similar processing power in the HDX as all the top-flight tablets from Google, Microsoft and Apple.

Multitasking, interface responsiveness and app load-speeds are fast. Even GPU-intensive games like Asphalt 8: Airborne are handled with ease.

One of the standout features of the HDX is Amazon's Mayday button. Tapping this gives you instant access to Support Staff via video chat.

The aim is to help you troubleshoot any problems and you can even let the person helping you to control your device remotely.

Amazon aims to answer users in 15 seconds or less and the service is available 24/7, 365 days of the year.

Amazon continues to ship the tablet with its customised version of Android. The latest version is dubbed Fire OS 3 or "Mojito". The lack of vanilla Android means the HDX lacks access to the Google Play store. Core applications including Maps, Drive, YouTube and Gmail are also missing.

Amazon has attempted to fill in these blanks. There's a robust email app, complete with IMAP, Exchange and POP support included as standard. It also syncs with the HDX's bespoke Calendar app. All of your contacts, depending on which email address you add, are then automatically added to the Contacts app.

The Docs application lets you view PDFs and Office documents, which is handy, but you cannot edit or amend them. And because the HDX isn't Google certified you can't get things like Google Drive to fill the void.

It's possible to download Kingsoft Office for Android from the Amazon App Store, but if you use Google Drive or Office 365, you may have problems. Polaris Office is available in the Appstore too, and is a great piece of software, but it costs 8.06.

The Fire OS 3 interface itself is easy to use. You have a Carousel at the top of the screen, which stores all your most recent stuff, apps, games, docs and the like. Below this is a more traditional row of application icons.

Everything else on the HDX Apps, Books, Videos, Newsstand, Web and Photos can be accessed via the textual links, which run along the very top of the Home screen. Universal Search is present, giving you quick access to anything and everything aboard the tablet, as well as Amazon's myriad of shopping channels and services.

At it's core this tablet is designed to be an extension of Amazon services. It's a shopping and content consuming device, not a creation device. Yes, you can work on it just not like you can on a typical Android slate or an iPad. And for professional users this presents a problem.

If you're already an Android tablet or iPad user, you will notice the sparse nature of what's on offer inside Amazon's Appstore. Big names such as Facebook, Twitter, Netflix, Angry Birds are present, but beyond these choices are limited.

You can't even download Chrome on the HDX, instead you are to use Amazon's Silk browser. This is a competent web browser, but it lacks the many features which make Chrome one of the best browsers on any device. It is possible to side-load Android apps onto the device, but there's no guarantee that apps will work properly and they could leave the device open to security flaws.

The HDX features a 1.3MP front-facing camera for video calls. It can also shoot 720p video, but the results aren't great. On the back, there's an 8-megapixel sensor, complete with an f/2.2 aperture, flash and electronic image stabilisation. Results are mixed, but it's worth having.

The Kindle Fire HDX is available in 16GB, 32GB, and 64GB models. All models come with dual-band, dual-antenna Wi-Fi (MIMO+HT40) and support 802.11a/b/g/n and Bluetooth 4.0 technology. Other standard sensors include ambient light sensor, accelerometer, and gyroscope. LTE and HSPA+ connectivity is optional.

Amazon says the HDX will last 12 hours with constant use, and in our tests it managed to crack double figures. Like the display and hardware, battery life is impressive. With moderate to light usage, you're looking at a couple of days before you'll need to charge it again, bringing it inline with the iPad Air in this regard.

The Amazon Kindle Fire HDX is a competent device. It's got top-end hardware, a gorgeous display, excellent battery life and a myriad of uses within Amazon's huge ecosystem. It is not, however, a business device and the lack of Google Play and core applications is the biggest reason for this.

For media consumption and shopping, the HDX has it all Amazon's myriad of services are easily accessed from anywhere in the tablet. But as a creation tool it is lacking when compared to offerings from Apple, Google and machines running Windows.

The Kindle Fire HDX is a powerful tablet, lightweight tablet. Performance is excellent and we love the overall design but the device is designed for media consumption and shopping. The HDX is not a business device so if you’re looking to create work using your tablet you’re still better off with something like Apple’s iPad or Samsung’s Galaxy Tab 10.1.