Google wants to prove there's more than meets the eye when it comes to Glass. 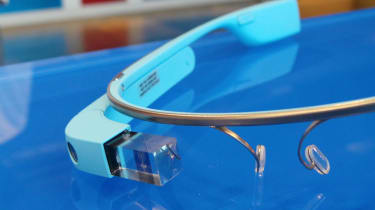 Despite being a beta product, Google Glass is available to buy in the UK priced at 1000. Whilst aimed at the developer community, anyone over the age of 18 can purchase a pair.

Does Glass have what it takes to revolutionise the way we interact with our environment? Or is it a whimsical idea Google is trying to force upon the masses?

After testing out the latest edition of Glass, we feel the device has potential.

Even if Google Glass does not take off as a consumer product, it has a number of use cases within the business environment. High-profile trials are being carried out by the US Air Force, Virgin Atlantic, NYPD and also in hospitals.

Glass also has the potential to help the disabled communicate more effectively. MindRDR is one such app, which allows users to take picture with Glass using their mind. The ultimate aim is to add features so people with severe multiple sclerosis, quadriplegia and locked-in syndrome.

Glass isn't like a smartphone or tablet. No matter how many demos you watch, the only way to get a feel for the device is by wearing it. I wasn't sure what to expect when putting Glass on for the first time. It sat lopsided on the table and looked weird and bulky.

Pick it up and you'll be surprised by how lightweight (50g) and robust it is. The frame is sturdy, but you won't want to drop it as the lens has no protection. 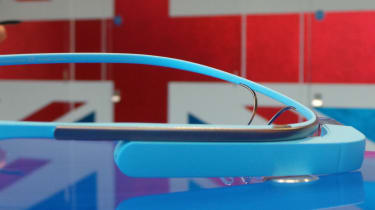 Glass is simple to use. To switch it on you tap the right hand frame and a heads-up display (HUD) pops up in front of your eyes. The effect is like seeing a 4-5in smartphone hovering horizontally a few feet in front of your face. The HUD has a 640 x 360 pixel count, and Google claims it's like looking at a 25in HD screen from 8 feet away.

The interface is navigated by touching the frame and using voice commands prefaced by the words 'Ok Glass'. Both are accurate and responsive and make the wearable device easy to use. 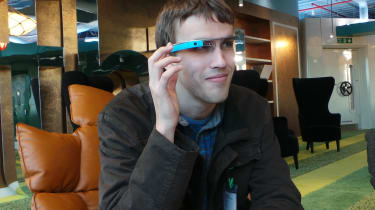 The lens sits over your right eye, but it's possible to adjust the hinge and move the heads-up-display so it's close to the centre of your face.

When the HUD display is off, the device doesn't block your vision. But you will feel self conscious, especially when you're the only person in the vicinity wearing Glass.

The device looks infinitely better when you clip on the see-through lenses or sunglass attachments which are included in the box. The latter giving the wearer a look akin to The Terminator. 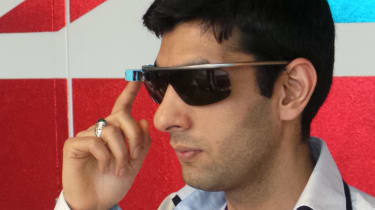 Talking to someone who is wearing Glass feels awkward as you're drawn to the lens and camera protruding from their forehead. You can tell when someone else is using Glass as you'll see light reflected in the lens. But even when they're giving you their full attention they are looking at you through the lens. It would be preferable if the hinge would lift up so the lens can be moved completely out of the way.

What can you do with Glass?

Glass needs to be connected to the internet to be fully operational, but this is common for all of today's smart devices. Google is positioning Glass as a standalone product and not as a companion device like smartwatches.

Still, it's possible to connect Glass to your smartphone via Bluetooth using the My Glass app. This provides a second screen experience, mirroring whatever you see through your lens.

So what's it like to use Glass? The homescreen displays the time and from here you can initiate a voice command to either start an app or perform a core functional. These commands need to be prefaced by the term Ok Glass...', and whenever you say the words, a prompt pops up on screen.

It's possible to ask Glass to:

We tested the basic voice commands and the responses were fast and accurate. When asked factual questions such as: 'Ok Glass, who's the 23rd President of the US?', the device popped up with a picture of Benjamin Harrison and read the answer out as well.

This brings us to another interesting point: there are no headphones attached to Glass. It transmits sound to your right ear via Bone Conduction technology. Sound is clear - and is barely audible to people around you. But the Google offices were quiet at the time of our visit and we've yet to see how Glass will perform in a noisy environment.

Text translation via the Word Lens app was one of the best features we tried. Glass zoomed in on a sizeable chunk of text and translated it from English to Spanish instantly. At this time it's also possible to translate from English to German, Italian or Portuguese and visa versa.

The camera is the most controversial but useful inclusion. Taking pictures (5-megapixel) and video (720p) is a doddle as you can activate it with voice commands. This will be particularly useful for those who have disabilities and may not be able to operate a smartphone or camera with their hands.

Glass surprised me. After five minutes wearing it, I could see the potential.

Controlling Glass with simple voice commands and swipes along the frame's edge felt natural. The interface took a little getting used to, but it's not complicated.

In terms of its design, I think Google has done a good job. Talking to people with a computer strapped to my face didn't bother me as much as I thought it would. Glass stayed out of the way until it was needed.

Talking to my colleague who was wearing Glass was stranger, because  I couldn't take my eyes off it. Glass will require time for the public to adjust.

We must remember the project is in the Explorer beta phase, so it's not perfect. The display resolution is low, swipe gestures along the frame can get jumpy and you'll get just hours of usage from this model. But these are all areas Google can improve.

The longer I spent with Glass, the more I was sold on it. I loved finding directions with Google Maps, taking pictures, and recording clips, using my voice and without the need for a smartphone.

Google's run-ins with governments and consumers over privacy issues have been notorious, especially in relation to its Street View project. Glass will undoubtedly keep the web giant's legal team working over time for years to come.

It's the inclusion of the camera which is going to cause most problems. Glass doesn't have a LED light when it is recording.

It's possible to for other to see when the device is being used as the lens lights up. But sneaky third-party apps will no doubt pop up, to make it more covert. You can already get an app that lets you wink to take a picture, for example.

Glass will be banned in casinos and cinemas as it could facilitate cheating and piracy. Bars, clubs and restaurants may also prohibit use. The Department for Transport in the UK has said it will issue a driving ban but it remains to be see if and how this will be enforced.

Another area of concern is eye strain. The HUD technology provided by Glass is not found in any popular mainstream products and the effects of  prolonged use are unknown.

Google is aware of possible issues and drafted in 20-year HUD veteran Eli Peli, a professor of ophthalmology at the Harvard Medical School to consult on the project before and during development.

According to Peli's assessment, the risk posed by Glass is low and he doesn't expect the device to trigger conditions such as phoria - misalignment of the eyes.

At the time of writing, battery life is unconfirmed with Google suggesting "all day of typical use" but warns users juice sapping activities, such as 720p recording and navigation, will reduce the life span. With heavy duty usage you'll see four hours of use. Recharging is quick - with 60 minutes to a full charge. We expect Google to improve this before any consumer launch.

The Developer Editions cost 1000 and it is unknown at this time whether Google will reduce the price for when the device goes on general release.

Less useful smartwatches, such as the Galaxy Gear cost $300, and from what we've seen of Glass, it could get away with being double the price. However, even when it goes on general release, we expect it to be a niche product.

This article was originally published on the 11 February 2014 and has been updated to reflect Google Glass is now available in the UK.

Battery: One day of typical use. Some features, like video calls and video recording, are more battery intensive.

Charger: Included Micro USB cable and charger. Glass is designed and tested with the included charger in mind. Use it and preserve long and prosperous Glass use.