Packing Intel's latest Atom processor and plenty of business features, is this the best Windows 8.1 tablet? 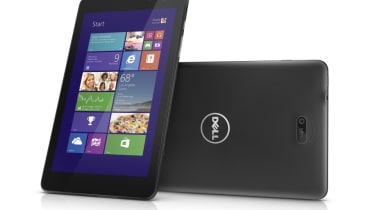 Microsoft has finally given manufacturers the green-light to develop sub-10in Windows 8.x tablets. Dell is aiming to capitalise on this by offering the Venue 8 Pro, a device chocked full of business features.

The Venue 8 starts at 239 inc VAT more than Google's latest Nexus 7 (199). However, it's less than the iPad Mini, which starts at 319. Is Dell's device better value than Android and iOS counterparts.

The Venue doesn't look like a mid-range tablet. It's coated with soft-touch plastic reminiscent of the Nexus 7. The strong frame makes the device feel sturdy and the concentric circles on the rear give the tablet a touch of style. 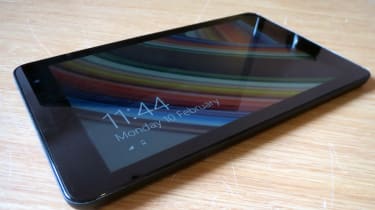 Dell has opted to relocate the Windows button in a surprise move. It's no longer at the front centre of the machine, instead it resides on the top edge. It takes time to get used to this unconventional placement, but it works well in portrait and landscape modes.

The power button and volume rocker lie on the right-hand edge, alongside a microUSB port. A microSD slot is hidden behind a flap on the same edge, and there's a headphone jack beside the Windows button on the top edge. The speaker on the bottom edge is off-centre so it won't be blocked by a hand in landscape mode a sensible design choice.

The recognisable 'Intel Inside' logo is emblazoned on the back of the tablet. Dell has opted for the Atom Z3740D - the firm's latest range of Bay Trail chips. The quad-core CPU has a middling speed of 1.33GHz, peaking at 1.86GHz.

The modest clock speed gets a leg-up from the GPU. This particular Intel HD graphics core runs between 313MHz and 688MHz, the fastest speeds available in the Bay Trail range.

The CPU is paired with 2GB of RAM, but don't expect benchmark-blazing speed from this machine. Whilst the Venue had little problem running Start screen apps and basic desktop software, it lacked the power to tackle intensive applications. We also noticed the gyroscope, was sluggish when changing the screen's orientation.

Comparing the Venue to other Windows-based machines such as laptops doesn't yield favourable results. It scored 36/100 in our overall benchmark test. But it scored a high 2,527 points in the Geekbench test, outpacing the Nexus 7 (1,687) and the iPad (759).

When it comes to battery life the 4,830mAh battery lasted a reasonable 10hrs 34mins. It's 90 minutes short of the Nexus 7 and an hour less than the iPad but double digits from a Windows machine is rare and should be applauded. Our final benchmark, boot time, ended on a high note. It took the Venue 9 seconds load the Start screen from a cold start - the quickest you can expect on any Windows machine. 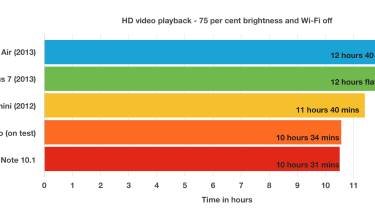