Need a smartphone on a budget? Check out these 2013 handsets which can be picked up starting at £21/month. 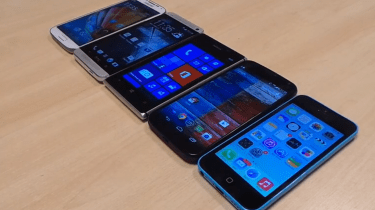 Picking a smartphone is tough as the market is saturated and it's a long term commitment. Contracts with devices included range from 12 months to 24 months so you have to choose wisely. With the major mobile manufacturers gearing up to launch their 2014 ranges, it's a great time to invest in a handset from 2013 if you're on a budget.

IT Pro took the Samsung Galaxy S4, HTC One, Nokia Lumia 925, Moto X, and Apple iPhone 5c and put them head-to-head in the video below. These cover the three main mobile operating systems - Android, iOS 7 and Windows Phone.

Although the One (32/month+ 29 upfront) is HTC's current flagship it's not the most expensive device on the list. The struggling manufacturer put all its weight behind the One, hoping it would compete with Samsung and Apple. Sales haven't lived up to expectations, but is the One underrated?

The Lumia 925 (23/month + 29 upfront) is a mid-range Windows Phone from Nokia. Despite Microsoft throwing money at marketing the platform, Windows Phones don't quite have the ecosystem and features of its Android and iOS counterparts. But is the Lumia worth a punt anyway?

The Moto X (Free from 21/month)  is Motorola's answer to the Nexus 5. It has innovative voice control features and gesture controls for things such as the camera. It's the cheapest device on the test, but can it be the best?

Samsung's Galaxy S4 (33/month + 29 upfront) is about to be replaced with the Galaxy S5, but there's still life in the old dog. Can decent internals and a good camera overcome its annoying TouchWiz skin?

And lastly, the iPhone 5C (34/month + 19 upfront) is is as budget as Apple gets in the smartphone space. Is it worth investing in the device which is just 50 less than the premium 5s?