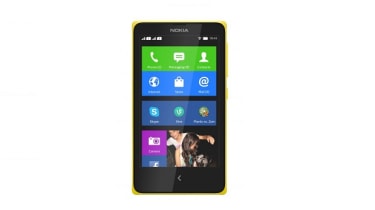 Nokia has set out plans to bring a slew of Android-powered devices to market.

The first member of the family to come off the production line will be the 4in Nokia X. This is expected to go on sale in the coming weeks for around 89.

It reportedly boasts a 3MP camera, and a dual-core 1GHz Qualcomm Snapdragon processor, but it is the device's user interface that has garnered the most attention.

The Nokia X features a customised version of Android, which echoes the familiar live tile look and feel of the Finnish phone maker's Windows-powered devices.

It also features support for Microsoft products, such as Skype, Outlook and OneDrive, from the get go.

The new Nokia X smartphones offer a desirable alternative to cheap Android devices for consumers in both mature and developing markets.

Furthermore, device users will not have access to Google Play, but will instead use a Nokia-specific version of the Android app store.

The reason for this may lie in Nokia's disclosure that 25 per cent of Android apps will not work straightaway with the device. However, the company has stressed it hopes software developers will work to reduce the number of incompatible apps over time.

The Nokia X will be joined later on by the Nokia X+, which will feature extra memory, and the 5in Nokia XL. Both devices are billed for release in early Q2, with the former expected to retail at 99 and the latter for 109.

Nokia made the announcements at Mobile World Congress earlier today, which is taking place all this week in Barcelona.

Speaking at the event, Stephen Elop, CEO of Nokia, said the Nokia X's low price point is a "massive opportunity" for the smartphone maker that strengthens its play in the affordable devices market.

He also billed the device as a way to attract new users and developers to the Nokia platform.

"For developers, the Nokia X is a great way...to increase their revenues, and we will offer a bunch of different monetisation options," Elop added.

Tony Cripps, principal analyst at market watcher Ovum, said the Nokia X family will provide end users with a wider choice of low-cost devices, and should force other OEMs to up their game.

"The new Nokia X smartphones offer a desirable alternative to cheap Android devices for consumers in both mature and developing markets and will help provide balance within carrier device portfolios at both the OEM and software platform level," said Cripps.

"Android application developers should welcome Nokia X, both as an additional channel to market and as a new revenue opportunity. Minimal porting overhead means there is little reason to wait for a critical mass of devices before committing to supporting the platform"