Nokia mashes Android with Windows Phone, giving us a glimpse of what could have been… 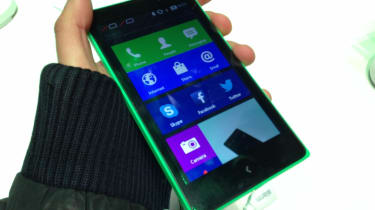 Work on the project is complete and the devices have been branded Nokia X. Could they be the biggest surprise of MWC 2014? We took a look at the Nokia XL - at 5ins it's the largest device in the X family of handsets and is priced at 109 SIM-free. Check out our video demo below:

Running a heavily customised version of the Android Open Source Project (4.1.2) - the interface has been made to look like Windows phone - no doubt inspired by Nokia's Lumia range. This is no bad thing, as Nokia has made the interface look difference and hasn't bloated the software with unnecessary gimmicks.

Nokia keeps it simple with one home screen. This lists all the apps and you can change the order, resize titles or group them into folders. 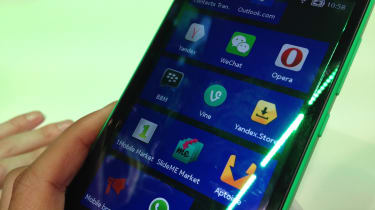 Microsoft apps such as Outlook, OneDrive and Skype are pre-loaded along with popular Nokia apps like Maps, Mix Radio and Music. Unfortunately, not all Android apps are available -  users will have access to 75 per cent of Android apps through a curated Nokia Store. Things are likely to have been different if Nokia wasn't owned by Microsoft, but it's better than having no Android apps at all.

The most noticeable tweak is the introduction of Fast Lane'. Swipe left or right from the home screen and this will bring up the most recent apps you've been using as well as messages. It's a simple customisation - useful and not overbearing. 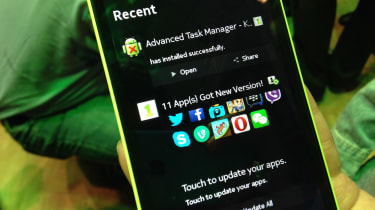 Not every software feature has been changed. The keyboard and settings menu will be familiar to Android users.

Nokia is renowned for exceptional hardware and the X series is no different. You'd be forgiven for thinking the 109 price tag means the firm may have opted for cheap materials, but this isn't Nokia's style. The XL has the same high-quality polycarbonate casing as the Lumia range and is about as far from bargain basement as you can get.

Nokia has opted for a dual-SIM configuration, which is popular in emerging markets such as Africa but rarely seen in the western world. Nokia has yet to confirm if the dual-SIM variety will be launched in the UK.

Like Apple's iPhone range, the Nokia XL devices have one button embedded onto the front of the device. It primarily operates as a back button, but a long press allows it to operate as a home button.

A Qualcomm Snapdragon S4 1GHz dual-core processor powers the XL smartphone along with a modest 768MB of RAM. Internal storage is on the low side with 4GB - but this can be beefed up with a micro SD card up to 32GB in size.

The XL has a 5-megapixel camera with an LED flash on the back, and a 2-megapixel front snapper. In an interesting move, Nokia will also allow the back cover to be removed. This allows users to replace the 2000mAh battery pack, and get access to the dual-SIMs and micro SD card slot.

Barring any software glitches, we think this is going to be a hit when it is released in the early part of the second quarter.