Everything you need to know about Intel's 2014 Atom chips.

Intel is working hard to catch up in the mobile market. During 2013 it proved that x86 chips could be scaled down and be efficient enough to be used within smartphones and tablets, but ARM chips still found their way into the majority of handheld devices.

The chipmaker is looking to increase its presence within the mobile device industry by 4x during 2014. We take a look at the hardware it wants OEMs to use inside their devices.

Intel Merrifield is a System-on-a-Chip (SoC) and is created using the 22nm process. It will feature the latest Silvermont architecture and PowerVR G6400 graphics engine from Imagination Technologies.

The dual-core chip will have a clock speed of up to 2.13GHz and support devices with up to 4GB of LPDDR3 RAM at 533MHz, 256GB of internal storage and a 13-megapixel camera. 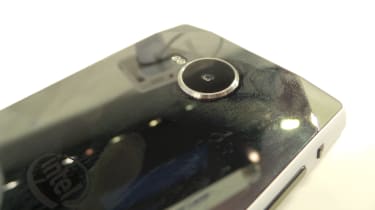 Merrifield chips can run 64-bit versions of Android KitKat and Windows 8.1. They will also support 4G download speeds of up to 150Mbps via Intel's discrete modem.

All chips will have integrated sensors and a built-in video processor too. This will allow smartphones and tablets to provide apps with motion, gestures, audio and location data without draining the battery.

Devices with the Merrifield chip will be able to carry out post processing and frame rate scaling allowing them to show up to 60fps.

Intel is claiming that Merrifield chips will provide 2x the graphics performance when compared to previous generation Clover Trail+ chip.

The firm is touting the addition of out-of-order executions as a big milestone for its Atom SoC range. This means the chips will now be able to perform more instructions per cycle, allowing it to process tasks faster by cutting down idle time. This is something that ARM has already implemented within its design.

We benchmarked an Intel 'Salt Bay' reference device with the Merrifield chip and 2GB of RAM. It returned a single core score of 866 points, placing it 10th in the list of fastest devices. The chip is better by 2013 quad-core processors from Qualcomm (Snapdragon 800) and Nvidia (Tegra 4). Samsung's Exynos quad-core Octa 5420 is the highest scoring chip with 948. 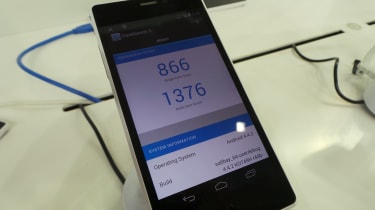 In the AnTuTu benchmark Saltbay device faired slightly better, out performing the Galaxy S4 and the HTC One. 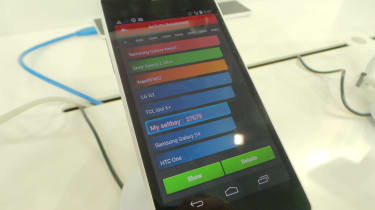 It should be remembered that these are synthetic tests and the true difference will come when the real-world performance is put to the test.

The Motorola Razr i had one of the best smartphone battery lives we've seen to date when it was released so can compete with ARM in this area.

According to the BatteryXPRT test, Intel claims its Merrifield chip lasted for 19.2 hours compared to the 14.5 hours for the Snapdragon 800 in the Galaxy S4. However, this was Qualcomm's 2013 chip and not the latest 805 chipset.

We will update our findings once we get our hands on a device that ships with Merrifield.

Intel claims it has over 87 tablet design wins for its forthcoming chip and will cover all segments from entry-level $99 devices through to high-performance products over $400.

Devices are expected to start shipping in Q2.