A great piece of hardware limited by the Windows RT operating system. 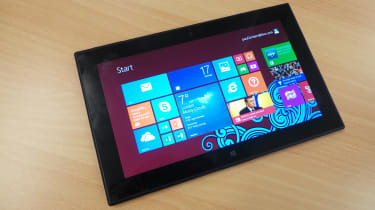 Build quality of the 2520 is excellent much like Nokia's mobile products. At 615g the tablet is lighter than Microsoft's Surface 2 (676g) but bulkier than Apple's samller iPad Air (469g). The Lumia has a thickness of 8.9mm and the 10.1in display features a 16:9 aspect ratio.

We like the matte finish on the back as it provides plenty of grip when you hold the device. 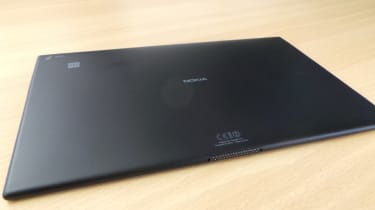 Nokia has included a 3.5mm jack, micro USB 3 and micro HDMI port, as well as a micro SD card slot.

However, the inclusion two proprietary charging points on this tablet is baffling. It means that even if you own a Nokia smartphone, you'll need a different cable to charge the 2520 tablet. We know that Apple has a propriety charger too, but the same cable can be used across the latest iPads and iPhones. 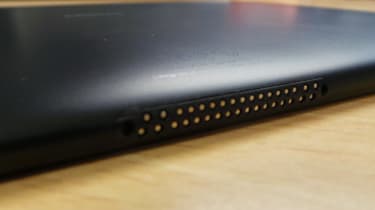 The full HD 10.1in display on the Lumia 2520 is the best feature. It uses Nokia's bespoke Clear Black Display Technology and has a maximum brightness of 650cd/m2 double most other tablets. This helps to present images and text in a clear, albeit slightly contrasted manner. Pixels are nonexistent from normal viewing angles, and Microsoft's tile-based Windows RT platform, with its emphasis on colour and animation, looks great. 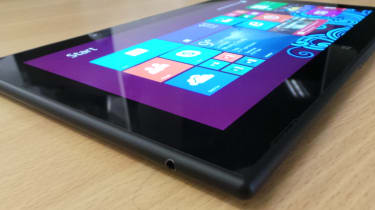 It's difficult to fault the 2520's display. It looks just as good as the iPad Air's and matches anything in the Android stable. Throw Nokia's excellent display technology into the mix, and you've got one of the best tablet displays on market.

Qualcomm's popular Snapdragon 800 chipset makes an appearance in the Lumia 2520. Clocked at 2.2GHz and backed up by 2GB of RAM, the 2250 has plenty of processing grunt under its hood. Apps open in the blink of an eye and there's zero hang in CPU/GPU intensive applications.

Touchscreen responsiveness is excellent too. But to get the best out of the productivity aspects like Office 2013, you'll need the keyboard accessory.

The inclusion of Windows RT 8.1 instead of full Windows in this tablet is the biggest problem. Although the latest version of the software includes features such as Universal Bing Search, App Snapping, multitasking the inability to install desktop apps is a massive omission. And the Windows MarketPlace is not brimming with must-have apps.

We found our device to be particularly buggy, with the keyboard failing to load up automatically and the device needing to be restarted to detect our SD card. The inability to install any desktop apps was also grating. Even the inclusion of Office 2013 could not save us from frustration. 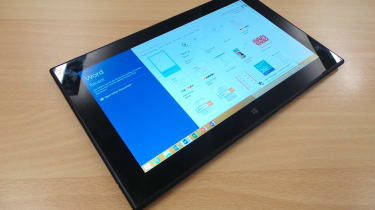 The 2520's huge 8,000mAh battery helped the device last just over 12 hours in our Iron Man battery test - one of the positive areas for this tablet. It's only outperformed by Apple's iPads in this area. 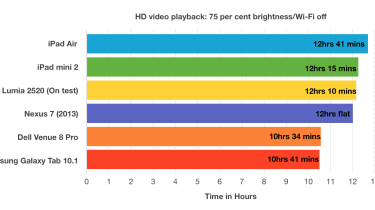 The Lumia 2520 packs a beautiful design, top display and 4G connectivity on the. But Windows interface holds the tablet back from competing with Android and iOS counterparts.

With reports suggesting that Windows RT could be ditched in the near future, can't recommend this device.

A well designed tablet with a solid display and great battery life, let down by the operating system.