Samsung unleashes a fantastic all-round Android tablet but it's expensive.

The 'Pro' branding on this tablet guarantees high-end components. Samsung has used Qualcomm's Snapdragon 2.3GHz quad-core processor, 2GB of RAM and offers a choice between 16GB or 32GB of internal storage.

In the Sunspider web-browsing benchmark, the device clocked a mediocre score of 620m/s. It's slower than the iPad mini 2, but in real-world testing you won't notice the difference in time it takes to load a webpage. 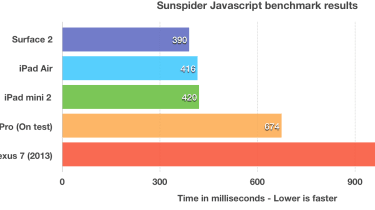 Transitions between home screens were smooth. There was the occasional judder - we noticed the Pro occasionally took a second or two to load the large weather widget when returning to the home screen and the Chrome app did crash a couple of times. But we also managed to stream content using demanding apps such as Netflix and Now TV, with no problems.

On the back there's an 8-megapixel camera, which takes clear shots.

The Tab Pro supports Wi-Fi 802.11a/b/g/n/ac and also the HT80 standard so you can hook up professional microphones. Wi-Fi Direct is available too and there's Bluetooth 4 and Kies support bundled in.

It's also possible to use the Android tablet as a giant remote control for your TV via the infrared sensor. There's a standard set of sensors built into the tablet including an accelerometer, geo-magnetic, gyro and light sensor.

Physical ports come in the form of the micro USB 2, with support for MHL and a micro SD card slot capable of housing a card up to 64GB in size.