Updated: iOS 7.1 has resulted in users complaining about battery life problems. We show you how to fix them. 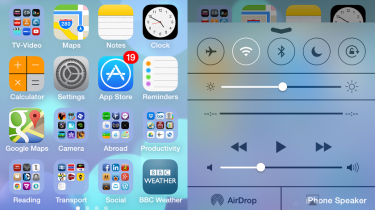 The issue has been reported across iPhones and iPads, so it appears to be a software problem. Ars Technica ran extensive battery tests on iOS 7.1 and found battery life to be slightly worse than before.

If these tips don't work...If your iPhone is still under warranty and your battery life cannot be fixed using the tips below it is worth visiting the Apple Store.

One iPhone owner named Vijayjcivil has claimed that his device was still under warranty so he took his device to an authorised service center where it was kept for observation and the battery life problem was verified. It was then replaced with an new iPhone 5s running IOS 7.0.4.

No one has found an official fix, but users have reported different levels of success fighting the battery drain. Here are 10 best practice battery life tips which can help:

While there are lots of tips and tricks designed to extend battery life as much as possible, sometimes the problem can be found by testing your device's battery. Former Apple Genius bar employee Scotty Loveless has created a test to help check whether your phone has a battery drain problem.

To test your battery, go to Settings > General > Usage. Write down the standby and usage times, press the lock button and leave the device for 5 minutes.

Now go back into the Settings menu and recheck the Usage stats. Your standby time should have increased by 5 minutes and Usage time decreased by 1 minute. If your Usage time rises by more than 1 minute, the problem lies in your phone not going into Sleep mode properly.

It's the common and understandable belief that you should close down unused apps when you're not using them, but this can actually mean you're using more battery life than the alternative.

When you are using an app, iOS freezes the other apps where you left them. They are not running in the background unless background data or location services are on. Manually closing and re-opening apps drain more life from your phone and so they should be kept open.

Push email can sometimes get stuck in a loop, constantly draining battery until you disable and re-enable it manually. Turn it off and the check the usage stats from step one, and if the battery drain decreases, then you've successfully identified the problem.

If this is the case, you can also try changing the fetch times to once an hour, every 30 minutes, or every 15 minutes, to improve the issue.

If you're having problems with your phone's battery life, then switching it on every five or 10 minutes in order to check the battery percentage can only add to the problem, increasing the rate at which power is being drained. To prevent this avoidable problem, try turning off the indicator.

More than anything else, it's your device's screen that's consuming battery life, so double checking the brightness setting is a good idea.

If you've set it to full blast then this will drain the power very quickly, so try turning it down to 75 per cent or use the auto-brightness feature. To do this go to Settings > Wallpaper & Brightness.

In addition to lots of the more obvious battery hogs detailed here, location services can seriously drain power from your device. It's a good idea to switch this off if it's not being used by going to Settings > Privacy > Location Services.

At the same time, turn your Bluetooth off from the quick settings menu by flicking up from the homescreen.

Background updates might be convenient, but they're an unnecessary hazard if you're worried about your device running out of juice at the wrong moment.

You can always go in and manually update your favourite apps, so it's best to turn off automatic updates by going to Settings > General > Background App Refresh.

No matter what you do, sometimes the old rule of turning it off and on again holds true. To do a hard reset of your device, hold the home and power buttons for ten seconds until it restates.

This won't erase any of your precious content , but it does reboot the phone and kill any potentially power-hungry background tasks.

It's hard for us to let our beloved devices run down to 0 per cent charge, but this can often be the most effective way of saving battery life in the longer term.

Charge your phone to full capacity, and then use it until the battery dies completely. Apple recommends doing this once a year to retain maximum battery health.

As a last resort, you can always try resetting the phone completely, but this should be the last option as it will also wipe all of your data from the device.

Connect your phone to your computer and restore it in iTunes as a new device, but don't restore from a backup.

There are reports of overheating devices, and also issues with background downloads, with an Apple user noting iOS 7.1 consumed his 1.2GB data allowance quickly.

Some iPhone users experienced their lockscreens or apps freeze and iOS 7.1 is also causing Touch ID to stop working in some cases.

Problems have been reported with setting up personal hotspots on iOS 7.1 as APN settings can no longer be saved after updating.

The issue is widespread enough that it appears to be another software bug, not something carrier-side. It has been confirmed in multiple countries. One user claims Apple support told them the issue would be reported to the developers, so a fix could happen.

Lastly, we've seen complaints on the iOS 7.1 incoming call screen. Where iOS 7 featured a full-page image of the caller, 7.1 crops the image into a circle next to their name at the top of the screen.

Users have complained about it, saying it's harder to see who's calling. Apple has not issued an official statement on any of these problems. We will keep you updated of any official fixes.

This article was first pubilshed on 18/03/14 and has been updated multiple times (most recently on 10/07/14) to reflect new information that has become available since its original publication.