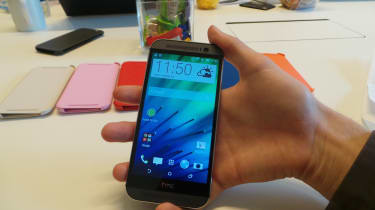 HTC has listened to customer feedback and added in a micro SD card slot. This will allow you to move content from almost all other Android devices and add another 128GB to the 16/32GB of internal storage space provided. 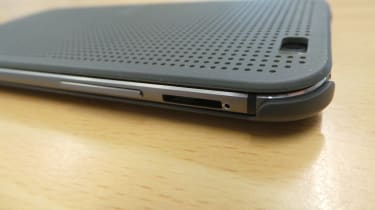 The worst part of the M8's size is the placement of the power button. HTC opted to put in on the right side of the top of the frame so you have to shift your entire hand to reach the top.

The M8's speakers are the loudest you'll find on any smartphone. HTC has replaced the amplifier and the BoomSound speakers are 25 per cent louder than they were on the original.

The M8 uses Android KitKat 4.4 software and this is overlayed with the firm's Sense 6 interface.

HTC has made a few changes to Sense. It's ditched the physical hardware buttons and in favour of KitKat's on-screen navigation bars. Gestures have been added - so you can double-tap the screen to wake the phone instead of having to press the lock button. You can swipe right from the lock screen to access BlinkFeed, left to widgets, down to voice dialing, and up to unlock. 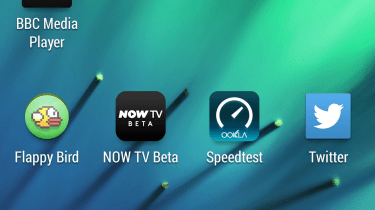 The M8 comes pre-loaded with Facebook, Twitter, 7digital and Fitbit. HTC itself included a few tasteful add-ons like Kid Mode, Tasks, Parent Dashboard, and Guide. The bundled apps are restrained to a good level but there no specific business apps like the Samsung Galaxy series.

The design of the notification drawer, settings app, launcher and BlinkFeed remain unchanged.

The M8 is powered by 2.3GHz Qualcomm's 2014 Snapdragon 801 chip and with 2GB of RAM we expect performance to be lightning quick. We'll report back on performance benchmarks in our full review.

It you want it free on a contract, you'll have to fork out 42 per month. You'll get unlimited calls and texts as well as 4GB of 4G allowance.

Overall the M8 is a valiant effort from HTC - it's better than its predecessor is all the key areas including display, performance and battery life. It's the best Android phone so far in 2014 but with the Galaxy S5 set to drop in early April, the M8 is unlikely to hold onto this title for long.

The M8 has a great 5in display and excellent battery life, but it's expensive and there's no protection from water or dust.