The HTC M8 officially launches with a 5in display, Android KitKat 4.4 and quad-core processor. 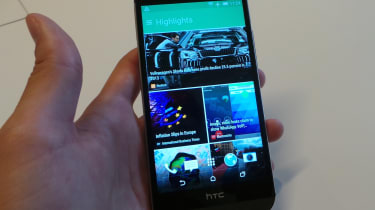 HTC has finally unveiled its 2014 flagship device to the world as the firm looks to grab a piece of the market dominated by Apple and Samsung.

Building on the foundations of the HTC One 2013, the M8 includes a larger screen and improved specifications.

Below are all the key feature of the smartphone . We also have a first look of theHTC M8. Does it have enough to compete with theforthcomingSamsung Galaxy S5?

Vodafone offering the M8 on a two-year contract for 42 per month.This allowance includes unlimited calls, texts and 1GB of data on 3G.

EE is stocking the device online from 26March, and the device will be available in stores on the 27 March. Those who buy the device before 10 April for 38 per month + 29 upfront fee will get 4GB of data along with unlimited minutes and texts.

As an incentive to buy the device EE will also be offering customers areturn flight to one of 12 European destinations including Amsterdam, Barcelona, Berlin, Brussels, Paris, Prague, Rome Vienna, Milan, Munich, Nice or Madrid. This offer is valid between28March - 10April.

Meanwhile, Three is offering the M8 for an upfront cost of 49 when you sign up to a 24-month contract. For 38 a month users get 600 minutes and 2GB of data, whilst the top-end contract of 44 a month provides all-you-can-eat data and all-you-can-eat minutes.

From April 4 the device will roll out in EMEA.