Office 365 subscribers can download functioning app on up to five iPads. 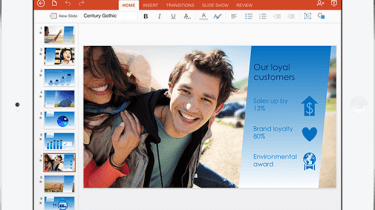 Microsoft has finally released its Office for iPad suite of apps as it looks to provide business productivity functionality to millions of Apple tablet users.

In his first public appearance as Microsoft CEO, Satya Nadella shared his ambition to drive the Office 365 subscription model by introducing cross-platform apps. Microsoft also announced that it will make Office Mobile for Android and iOS smartphones free with full functionality.

What you need to run Office for iPad?

You need an iPad running iOS 7.0 or above. This means the apps will run on the iPad 2, 3, 4 as well as both versions of the iPad mini and the iPad Air.

You will need 672MB of storage space to install the entire office suite. Each app is available to download seperately, so you're not forced to install anything you might not use, freeing up space. Microsoft offers a Word app (246MB), Excel app (221MB) and a PowerPoint app (205MB).

Office for iPad is available now. Individual apps are free to download from the Apple App Store and you can view documents, presentations and spreadsheets without charge.

However, to get access to editing capabilities you'll need an Office 365 subscription.

With that in place, users will be able to install the Office for iPad apps on up to five tablets, as well as desktop copies on up to five Mac/PC devices.

A 30-try free trial of Office 365 is available here: www.office.com/try

Office for iPad is available in 135 countries and 29 languages are supported including English, French, German, Italian, Spanish and Chinese.

Meanwhile, in an attempt to attract Android and iPhone smartphone users to Office - Microsoft has announced that it is making Office Mobile free on all platforms.

This suite was previously a unique selling point for Windows Phone devices, but Microsoft has decided to be device agnostic. Users wil now be able to view and edit your Office content on any smartphone for free.