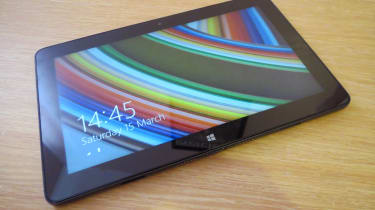 The Venue 11 Pro can be kitted out with a range of accessories. The best is the 'Tablet Keyboard', which provides a full-size laptop-style keyboard and a second battery. It has a micro-USB connection for separate charging, and good build quality. The attachment mechanism is simple and sturdy, and its keys are well-spaced, with a decent layout and a good action. 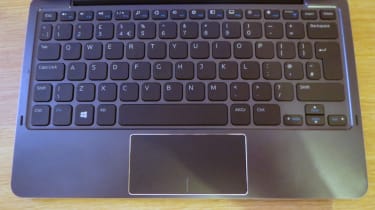 The Tablet Keyboard is not cheap at 176 but it is a better than options available on rival devices such as the Type Cover (110) on the Surface Pro 2. However Dell's accessory adds a lot of weight. When attached the Venue 11 Pro weighs almost 1.6kg and is 22mm thick the dimensions of a chunky Ultrabook, and more than the Surface Pro 2 when paired with any of its accessories.

The 117 Slim Tablet Keyboard mimics Microsoft's Touch Cover, but costs 18 more. It's got no second battery, it's coated with functional fabric, and its plastic keys are poor, with less than a millimetre of travel and an unsatisfying action.

Dell also sells a desktop dock. This adds numerous USB 3 ports, display outputs and a Gigabit Ethernet socket for 14. The final accessory is a stylus that's not yet available to buy but will cost 37.

Early Venues were affected by the same screen-dimming issue as the Venue 8, but a firmware update has fixed this. Our review unit registered a 389cd/m2 brightness level and a contrast ratio of 992:1. They're superb results that deliver enough punch for work under bright office lights. Microsoft's Surface machine has a better 414cd/m2 brightness, a poorer 899:1 contrast ratio, and the same Full HD resolution. 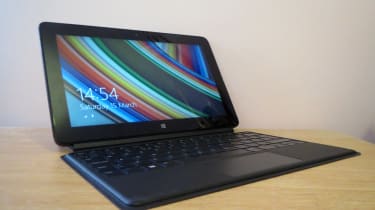 Both panels are responsive to the touch, and have excellent colour accuracy. The Venue's work abilities are further underlined by a 94.5 per cent sRGB gamut coverage figure some pinks, purples and deep red shades fell slightly short.

With high quality throughout, the Venue's screen is the match of Microsoft it's great for work. Those who need Adobe RGB-level colour accuracy need to look elsewhere.

Our Venue was the most powerful device available. It included a Core i5-4210Y Haswell processor - from Intel's ultra-low-power range. The 1.5GHz stock speed and 1.9GHz Turbo peak for the two cores didn't compare well with the Surface Pro 2.

Microsoft machine comes with a Core i5-4200U chip with a stock speed of 1.6GHz and a 2.6GHz Turbo Peak. The CPU in the Surface also had HD Graphics 4400 a better bet than the HD Graphics 4200 core inside the Venue. In our tests, the Surface Pro 2 outperformed the Venue 11 - but there's not too much in it. 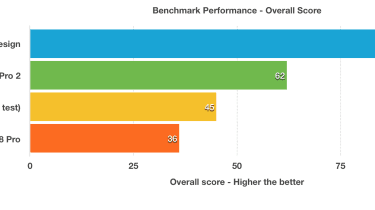 The Dell tablet has enough power to run the Windows 8 Start screen, Metro-style apps, and most desktop software without a hitch we ran Office applications, web browsers and Paint.net without any issues. But any heavy duty business apps will struggle.

The SSD proved inconsistent. Its 451MB/s sequential read speed was superb, but its write pace of 137MB/s was little better than many hard disks. The Venue's 13s boot time was similar to the Surface.

Our pricier Venue came with Dell's larger 36Wh battery, and in our video looping benchmark the Dell's single power pack (5 hours 42 mins) couldn't quite keep up with the Surface Pro 2 (6 hours 20 mins). Once we plugged in the second battery, this all changed. The Venue's revised 10 hr 14 min lifespan bested Microsoft by four hours. 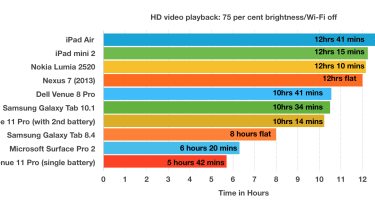