4G speeds, cost and coverage put to the test

Every UK network is now offering high-speed 4G internet. With claimed speeds of up to 60Mbps, IT Pro took to the streets of London to find out what you can realistically expect.

We also looked at the allowances, costs and coverage offered, which are equally as important for consumers and businesses looking to get value for money.

What we used to test?To ensure fairness all SIM cards were tested using the HTC One M8 between 12 noon - 6pm.

We started off by running the free Speedtest app in each of the six locations. We did this three times to get average upload and download speeds.

EE came top, clocking an average download speed of 19.05 Mbps. It was also the only operator which managed to get over 25Mbps in three locations.

O2 and Vodafone were separated by a whisker as they averaged speeds of 17.79Mbps and 17.71Mbps, respectively. This is because they are sharing masts in some areas to accelerate their rollout.

Vodafone also provided the fastest speed, averaging 39.95Mbps at our offices in Fitzrovia.

Three brought up the rear, with average of 11.97Mbps across the board. But it did clock the highest speed at Kings Cross with a speed of 19.29Mbps and was second fastest at Waterloo. A poor showing at Regent's Park where all the other networks were quick pulled down the average. 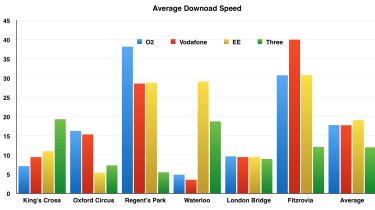 As expected, average upload times were significantly slower, with a maximum of 26Mbps. EE had the highest average upload speed 13.05Mbps across all test locations. Three (10.66Mbps) was runner up, and O2 (9.13Mbps) and Vodafone (8.57Mbps) were closely matched again. 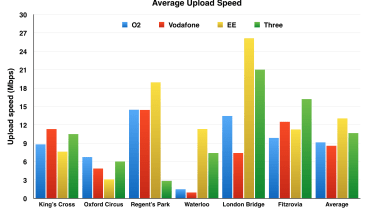 The Speedtest app provided a good indicator but how did the networks perform with a real download? We measured the time it took to download a 200MB test file, the average size of a 45-minute TV show.

The results showed there was little to separate EE, O2 and Vodafone in four out of the six locations - King's Cross, Regent's Park, London Bridge and Fitzrovia. 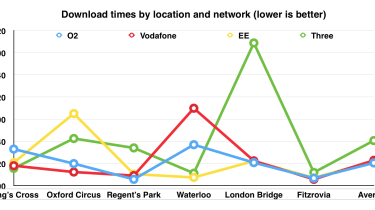 The fastest time we were able to download the test file was 57 seconds. This was at two locations - Regent's Park (O2) and Fitzrovia (Vodafone) where both networks had speeds hovering around the 40Mbps mark. Theoretically, this means you could blast through a 1GB data allowance in 5 minutes.

We've taken a look at SIM-only plans for the purposes of this comparison. We start with providing the minimum cost for 1GB of data and then look at the maximum available allowance. Where possible, we've split sections into consumer and business tariffs.

ThreeEvery customer is upgraded to 4G as standard, for no extra charge. At the time of writing Three offers 4G in 30 towns and cities and aims to have it active in 50 regions by the end of 2014.

VodafoneYou'll need to sign up to a Red Plan for 4G services. It's currently available to 36 per cent of the UK population and Vodafone is rolling it out to 208 towns and cities. The coverage checker will show you if it's available in your area.

Starting price: For businesses, the Red Business plans offers 4G for 25 per month, with unlimited calls and text, 3GB of data and 250MB of Wi-Fi. Vodafone allows you to switch your SIMs between devices to share data or choose to access to Sky Sports Mobile TV or Spotify Premium.

Consumers can get from 4G from 21 per month (12 month contract) with unlimited calls + texts and 1GB of data.

Maximum: Business customers can get the Red XXL plan for 37.50 per month. This provides unlimited calls and texts, 13GB of data and 500MB of Wi-Fi.

Consumers can top out with a 41 per month plan for unlimited call + texts, 9GB of data and a 12 month subscription to either Sky Sports Mobile TV or Spotify Premium.

The network is offering 4G services to 13 major cities including London, Manchester and Newcastle as well areas surrounding them.

At the time of writing, all O2 business customers get 50 to spend on Twitter advertising, 12-months free subscription to Evernote Premium and access to special offers via the Priority Moments hub.

Starting price: For business users 15.83 per month gets unlimited calls + texts and 1GB of data.

Maximum: Splashing out 25 per month provides unlimited calls + texts along with 8GB of data for business users.

For 30 per month (12 month contract) consumers can get unlimited calls + texts along with 8GB of data and a 12-month subscription to The Sun+.

EE's 4G coverage is the most comprehensive in the UK with 200 towns and cities now activated. You also get the Orange Wednesday 2-for-1 cinema tickets included.

Starting price: 17.50 per month (12 month contract) gets you unlimited calls + text and 1GB of data.

Maximum: 40 per month gets a business user 36GB of data along with unlimited calls and texts.

For consumers 25.99 per month (12 month contract) will buy 4GB of data along with unlimited calls and texts.

Which network is best value?

4G doesn't quite live up to the 60Mbps advertised speeds as we topped out at 40Mbps. Around congested urban areas like London you can expect speeds to average between 10 - 20Mbps.

Real-world results showed there was little to separate EE, O2 and Vodafone in terms of raw download speeds. Three was slightly slower but you can still expect 10Mbps+ in most areas.

The networks take a different approach to try and attract customers. EE focuses strengths like widespread coverage and consistent high-speeds.

Three might not be the fastest but it is the cheapest and the only network which provides true all-you-can-eat data, so you don't need to worry about going over data limits. It is also the only network to allow you to use your allowance in the US, so if you're a frequent traveller this will prove invaluable.

O2 and Vodafone offer similar high-speeds and enticing add-ons. O2 offers subscriptions to Evernote and The Sun+, whereas Vodafone throws in access to Sky Sports Mobile or Spotify Premium.

Ultimately, it's going to depend on the reception. For many people in the UK, the only way to currently get 4G will be to sign up to EE as it offers coverage in areas other networks haven't reached.

Make sure you check every operator's coverage checker before signing up to a plan. Also take time to look at the benefits offered:

EE - This is the network if you need the widest possible 4G coverage and consistent high-speeds and you're not too interested in add-ons.

Vodafone - Covers a third of the UK. This one is for sports or music fans as you get the choice between subscriptions Sky Sports Mobile and Spotify Premium.

Three - Not the fastest, but the network of choice for those who don't want to be constrained by a data limit. Also allow you to use your allowance in the US.