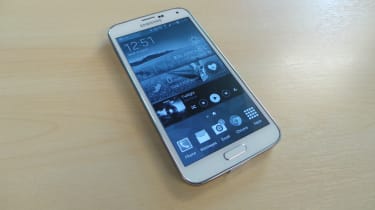 The Samsung Galaxy S5's fingerprint scanner has been hacked using a glue mould, just a week after it went on sale.

The fingerprint sensor, used to secure the device against the unauthorised use of apps such as PayPal, was bypassed by Berlin-based Security Research Labs (SRL) who tried to overrule the feature to demonstrate how easy it was to crack.

SRL managed to create the mould from a fingerprint on the Samsung Galaxy S5's screen.

It then transferred the fingerprint using glue and graphite spray. Researchers swiped the faked fingerprint across the sensor, mimicking a finger swipe.

Although other devices - including the iPhone 5S - also boast a fingerprint reader, Samsung is the first to open up the API, allowing third party app developers to integrate the sensor in applications.

If you think into the future, once ATMs have fingerprint scanners and once heads of state start using fingerprint authentication, it's going to become a lot more attractive.

PayPal was the first company to introduce the feature on the Galaxy S5, but the online payment provider doesn't feel too concerned about the flaw.

PayPal told the BBC: "The scan unlocks a secure cryptographic key that serves as a password replacement for the phone.

"PayPal also uses sophisticated fraud and risk management tools to try to prevent fraud before it happens. However, in the rare instances that it does, you are covered by our purchase protection policy."

Another differentiation between Apple's implementation and Samsung's is the iPhone maker does not allow multiple attempts at using the fingerprint scanner to take place if users are not a correct match.

Samsung's device allows you to try five times, put the phone in sleep mode, wake it and try again.

Although only limited information can be accessed at the moment, SRL's project manager Ben Schlabs told the BBC it will become a much bigger concern when fingerprint scanning becomes more prevalent in different applications.

"If you think into the future, once ATMs have fingerprint scanners and once heads of state start using fingerprint authentication, it's going to become a lot more attractive," he said.

"Once people develop better or faster methods, or once there are fingerprint databases of images that get leaked, it's definitely a concern."