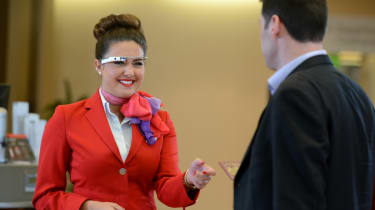 Virgin Atlantic has declared its six-week trial of wearable technology, including Google Glass and Sony Smartwatches, a success, with the airline confirming to IT Pro it is now evaluating plans for a wide-scale rollout.

"The trial was a huge success with positive feedback from both our staff and customers on the usage of wearable technology," a Virgin spokeswoman told IT Pro.

"We are currently assessing the costs and benefits of rolling this out to the rest of our team in the Upper Class Wing and hope to make a decision soon. At the same time, we are also looking at other opportunities within the airline that we believe could benefit from the use of wearable technology."

During the trial at Heathrow Terminal 3, Virgin Atlantic's Upper Class passengers were greeted by staff wearing Glass during the check-in process.

Staff were also able to use devices to provide real-time details to passengers including details about local weather and translate information into foreign languages.

Google Glass has yet to be officially released to the public, although the tech giant did have a special one-day sale in the US earlier this month, charging $1,500 + tax.

Google has also been running an extensive "Explorer" program, allowing developers to purchase the device, provide feedback and develop apps for it.

Consumer adoption of Glass is unlikely to be high upon release due to its pricing, but it is clear there are a number of business benefits presented by the hands-free device.