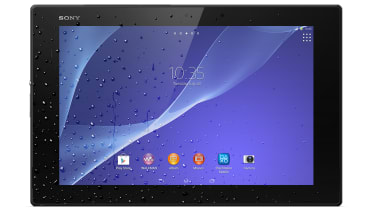 The Z2 has a 6000mAh power pack sealed in the back. In our IT Pro Iron Man test, the Z2 lasted a total of 10 hours and 46 minutes, placing it in fifth position overall. This may not seem great, but when you factor in the 10.1in size of the device you'll see it's an impressive feat.

The only Android device to outlast the Z2 is the Nexus 7, which has a display 3ins smaller. The only other 10.1in device that has lasted longer than the Sony tablet is the Lumia 2520 running Windows RT. Both iPads are smaller at 9.7ins and 7.9ins respectively. 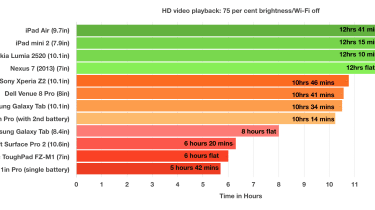 The biggest strike against the Xperia Z2 isn't even Sony's fault. The Z2 provides access to the Play Store and while almost all Android apps are compatible with the Z2, not all are optimised for the 10in display.

The Z2 has a few issues. The port covers are more fragile than on the Xperia Z2 smartphone, and friends at sister website Know Your Mobile managed to snap theirs off.

The screen works fine most of the time, but seemed to have trouble picking up touches to the navigation keys occasionally.  The 8-megapixel rear camera is also disappointing.

However, these are minor niggles and don't detract from the overall high-performance of the Z2 tablet. It's so thin and light you'll forget you're using a 10in behemoth, and it's a worthy alternative to the iPad.

The Xperia Z2 is the best 10in Android tablet we've tested to date. It's lightweight, waterproof, has great battery life and a beautiful screen