S5 gets off to a flier, despite mixed reviews 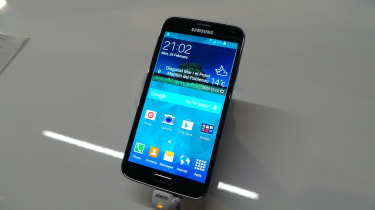 The Samsung Galaxy S5 has shipped 10 million units in 25 days, 48 hours faster than its predecessor, the S4.

Figures come despite mixed reviews for the latest in Samsung's flagship series, which critics lambasted for its lack of significant changes in design. The critical reception to the S5 led to the resignation of its design chief, Chang Dong-Hoon.

The figures mean that Samsung ships 278 phones per minute, four every second. The S5 beat the record set by the S4, which took 27 days to reach the same total. The S3, by comparison, spent a full 50 days on sale before it hit a similar figure.

The reports, from South Korean website Hank Yung, are still unconfirmed and Samsung has yet to comment.

The S5, when compared to the S3, has sky-rocketed to success, taking half as much time to reach the landmark 10 million total. Compared to the S4, however, it only pipped it to the post by two days. What's more, the Galaxy S5 shipped in more than double the amount of countries to the S4, 125 to 60. If true, the numbers represent a slowing down of what was once rapid growth for the South Korean firm.

It's not all doom and gloom, however, since the stats suggest the Galaxy S5 will outsell its predecessors, which shipped 40 million and 60 million units overall.