Update - The launch of Windows 10 is fast approaching, and now you can try out Microsoft's mobile version. The Windows Phone 10 technical preview is freely available, to members of the Windows Insider Program, and you can download it now for a sneak peek. Be warned, though - it's still unfinished software, and you run the risk of bricking your device if anything goes wrong.

Windows as a connected platform is deeply at the heart of Microsoft's new business plan. As such, a lot of energy is being invested into propping up the still comparatively unpopular Windows Phone OS. However, interesting Windows 10 features such as Continuum could go a long way to making cross-device integration - and thus Windows Phone in general - a lot more popular.

The Windows Phone 8.1 update (available from June 2014) injects key functionality into the OS, adding everything from a basic drop-down notification menu to a bucketload of enterprise features and enhanced customisation options.

But has Microsoft finally given the stylish interface the substance to match it?

Windows Phone users have had to make-do with a tiny popup notification running along the top of the screen for near-on four years. Action Center puts an end to this misery.

With a swipe down of the screen, you're greeted with a messages and quick-toggle settings where you can adjust Wi-Fi, Bluetooth, Airplane Mode and Rotation by default. You're able to swap out any of these quick toggles for a number of others such as Brightness in the settings menu. Below this you'll find any notifications you have displayed in a list and touching any of these will bring up the relevant app. 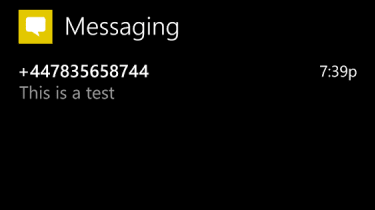 With Microsoft's track record in the enterprise you'd expect the mobile OS to already be brimming with business friendly features but this hasn't been the case. Windows Phone 8.1 attempts to address this.

The Windows 8.1 update simplifies device manageability for IT admins, allowing businesses to sign up for enterprise accounts to streamline the distribution of apps to devices.

VPN support for vendors including Dell/SonicWALL, Checkpoint, F5 and Juniper is built-in as standard. IT admins also have the ability to restrict access to apps through both black and whitelists, or block access to the Windows Store entirely, for greater levels of control.

Finally, the updated Outlook allows you to sign and encrypt e-mails directly and force S/MIME policies.

Windows Phone has always been been in the middle ground when it comes to customisation. It's not as rigid as iOS and but equally you can't transform the homescreen entirely like you can with Android.

With WP 8.1 devices it's possible to have three columns of tiles for any device, something we first saw on the Nokia Lumia 1520 tablet. We found it useful to have large tiles devoted to apps that benefited from live information and a combination of medium and smaller for the lower priority but still often used. 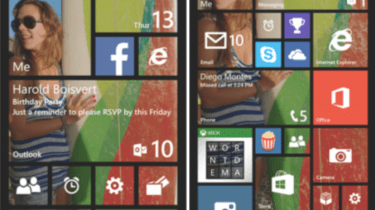 You're also able to set a picture as the Start background and this gives a neat jigsaw effect. Some tiles refuse to change, keeping a solid background colour but it doesn't ruin the overall effect.

Windows Phone has had one of the best default mobile keyboard since its launch and Microsoft has made it even better. The standard keyboard built into Windows Phone 8.1 now supports gesture-based typing, much like the Swype app you can get for Android. 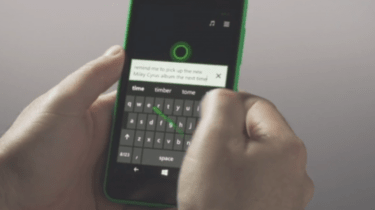 Dubbed Word Flow', this means you're able to type words by touching and swiping through the relevant letters, never having to remove your finger from the screen. This makes one-handed typing a lot easier, as you can swipe using just a thumb. We found Word Flow worked just as well as similar keyboards and was a viable alternative to traditional typing. The dictionary of recognised words in Windows Phone 8.1 has also been increased, meaning less autocorrect woes and better predictions.

Cortana only supports American English at present so in order to use her your phone will have to be set to United States English. Getting set up is a matter of first going into Settings and changing your device's Speech settings to English (United States).

This will begin a 66MB download so be aware of this if you're using mobile data. This will get you the necessary speech files for Cortana after a restart. Now you'll need to also set your Language settings to English (United States) which will trigger a further restart. Finally, it's a matter of going back into Settings and changing your Region to United States. After one last restart you'll find Cortana listed under your apps. It's a few hoops to jump through if you want Cortana support now but if you can wait, British English support is expected to arrive later this year. 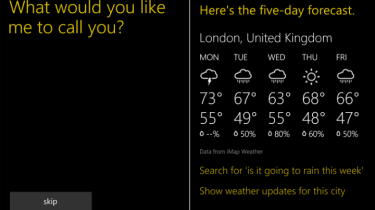 Cortana is also available anywhere in the operating system from the search button and offers many of the same voice commands as Siri on iOS and Google Now on Android. You are able to ask her to create reminders for you, set alarms, open apps or recommend a local restaurant. Bing will also bring up search results for any voice commands Cortana doesn't understand, similar to how Siri and Google Now operate. Even when set to American English Cortana was able to understand most voice inputs and acted accordingly.

Similar to Google Now, Cortana is also able to access your e-mail for flight information and will also bring up news and articles relevant to your interests. Cortana stores all this information she gathers on you in Cortana's Notebook'. Another nice touch is how search is now incorporated system-wide. Searching will now not only search the Internet via Bing but will also scan through your messages and e-mails making important information only a few taps away.

Wi-Fi Sense is baked into Windows Phone 8.1 and operates silently in the background scanning for public hotspots. It automates connections by accepting terms and conditions or provides your name, e-mail or phone number to enable you to get online quickly and easily for wireless networks that require a landing page.We found Wi-Fi Sense worked well, connecting to a number of EE powered hotspots across London without requiring any user input at all. 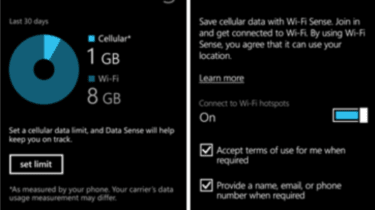 If your device is work provisioned you might find your IT admin disabling this.

Wi-Fi Sense is also supported by Storage Sense and Data Sense, two useful ways to manage storage space and mobile data you're using. Another app, Battery Saver, gives you an easy indication of what apps are draining your battery.

Windows Phone 8.1 is a giant step in the right direction for Microsoft but there's still work to be done to close the gap to its Android and iOS rivals.

We love the Word Flow keyboard, enhanced notifications and Sense applications. The enterprise features are sure to make this more appealing to business deployments too.

The update has been popular with other users too, with Microsoft boosting this popularity by providing a wide array of apps to download (more than half a million as at the end of 2014).

But where does the future lie for Windows Phone as a brand? In September 2014, a Microsoft document leaded toGeek on Gadgets, suggested the software giant was moving forward with plans to phase out the Windows Phone and Nokia branding after the new OS release.

The company acquired Nokia in early 2014 in a $7.2 billion deal, and is said to have been keen to drop the name ever since.

These rumours were supported by the fact that Microsoft recently stopped using the term Windows Phone in television adverts for new handsets, as well as the increased focus on regular updates for the next OS rather than preparation for Windows 10 and beyond.

In the absence of the Nokia brand as is, the company would be left with the Lumia branding for any premium smartphone releases in the future.

Turn the page for our top 10 Windows 8 productivity tips.