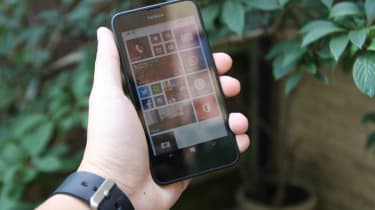 The Lumia 630 is the first smartphone to ship with Microsoft's Windows Phone 8.1 software. This brings a number of crucial features like a notification panel, enhanced keyboard and more MDM policies. But is the sub-100 hardware the weak link?

A number of compromises have to be made to hit the budget price point with the 4.5in IPS display the most prominent casualty. It's got a basic 854 x 480 resolution so means images and pictures are not as pin sharp as budget rivals like the Moto G (1,280 x 720). 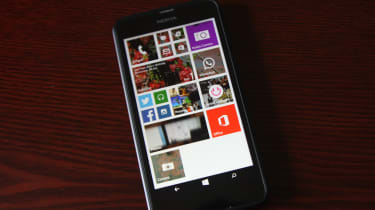 There's no auto brightness sensor and adjusting in the OS only allows three settings: Low, Medium or High rather than a slider scale. We also noticed uneven backlighting, most prominent at the top of the screen when you use a white background for the menus. However, maximum screen brightness is respectable at 396 cd/m2.

The 630 casing is made from plastic and has a nice matte finish. If you opt for a green Lumia 630, you'll get green matching buttons for volume and power on the sides. It's a subtle improvement on the Lumia 625 which featured contrasting black buttons.

The back is user removable, allowing you to add micro SD card (up to 128GB), replace the battery or change colour. 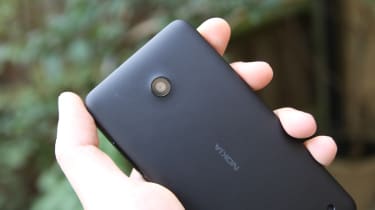 Weighing in at 134g, the Lumia isn't bulky. The placement of the side lock button in the middle makes it easy to press when holding the device with one hand and volume buttons are found above.

Internal components are mid-range. Nokia uses a 1.2GHz quad-core Snapdragon S400 processor to power the device, but RAM is limited to 512MB and when switching between apps there is noticeable pause.

In our tests using the Sunspider web browser benchmarks, the Lumia 630 scored 1460.4ms which puts it on a par with the Moto G which scored 1455.5ms.

The 8GB of internal storage can be mitigated by the micro SD support, but there's no substituting the lack of 4G. However, with a maximum allowance of 1GB the high-speed connection would use this up quickly.

The camera is another area where the difference between the 630 and high-end devices is apparent. The 5-megapixel rear camera is average and the lack of LED flash combined with a F/2.4 lens practically rules out low-light photography. 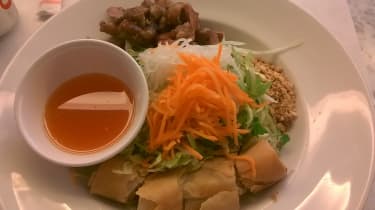 With the stock camera app in Windows 8.1 and Nokia Camera both slow to open and sluggish autofocus, the device is not ideal for capturing fleeting moments.

There's also no front facing camera which rules out the ability to take selfies and use it for video conferencing. When used alongside a Moto G, we found the captured images were slightly better on the 630, often with more detail in the shadows and more vibrant colours.

Battery life was adequate, with the Lumia 630's 1830mAh battery easily lasting a day of moderate use before requiring a charge. The ability to replace the battery should also help to increase the longevity of the device.

The 630 used up 12 per cent of the battery for every hour of Wi-Fi browsing (with brightness set to medium) and 10 per cent when playing a HD video. This consumption is on par with most high-end devices.

The Windows Phone 8.1 operating system brings a host of updates. Action Centre is one of the most basic yet crucial addition. The drop-down notification menu allows you to see any missed calls or message alerts.

You also get useful quick toggles in Action Centre, allowing you to change often used settings such as Wi-Fi, Rotation Lock and Brightness. There are four slots available and you can swap these out in the Settings to your personal preference.

Microsoft still needs to improve this feature. Even when you click on a notification, it remains in the thread and you need to manually clear it.

Cortana is another eye-catching feature of Windows Phone 8.1. To get the voice assistant to work, you'll have to set the Lumia 630 to US language and region for now, as British English support is scheduled for later in the year.

The virtual assistant is able to understand most of the voice commands from Android and iOS, meaning you can send messages, check calendar appointments or search for coffee shops in the local area, via voice.

The Lumia 630 is limited by the hardware specifications but it remains good value if you can track it down for the sub-100 price. This seems to be tricky as at present O2 looks like the one place where you can get the device for 99. Other retailers are offering it for 130, so if you're not on O2 we'd recommend the simlar priced Moto G instead.

A great budget Windows Phone device with a removable battery and expandable storage.