Drivers can now control smartphone apps with their voice 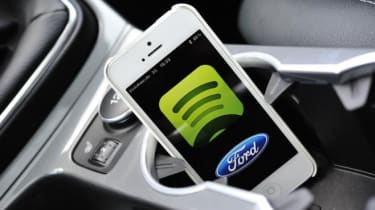 Ford has started rolling out the latest version of its in-car voice control system to its European fleet.

Sync AppLink, which is powered by Nuance technology, allows users to control popular apps directly from an Android or iOS device with their voice.

Compatible apps include Spotify, TomTom, Hotels.com, Eventseeker and Cityseeker. Ford also has a feature called Glympse', which allows users to post their location directly to Facebook and has open sourced the SDK to entice app developers to add compatibility.

IT Pro had a play with the Ford Sync EcoSport. Ford's Sync technology has already allowed users to  dial numbers, control music, and have text messages read aloud.

The latest version of Sync is the most intuitive to date. Ford has stripped down the menus, so it's easier to activate features. Hit the voice activation button on the steering wheel and you're prompted to say a command like dial or launch a mobile app.

There's no longer any need to pre-configure voice actions as the system is able to process natural language, and the level of accuracy is much improved.

For the system to work you have to connect your Android or iPhone to the car. Hit the button on the steering wheel > say "mobile apps" > then the name of the app. It's then possible to control your music or get directions, depending on the app you're in.

When using an app, the system locks the screen on your smartphone to limit the temptation a driver may have to reach for it.

AppLink is factory-installed into the EcoSport, Fiesta, B-Max, Focus, C-MAX and Kuga models as standard. Users wanting integrated navigation can opt for the Sync 2 - this is an optional extra costing around the same price as an iPhone (529).

What's in the pipeline?

Typically the roadmap for in-car integration is 18-24 months. John West, senior architect at Nuance, was on hand to give IT Pro a glimpse about the technology the firm is planning to make available to car manufacturers.

While continuing to fine-tine its natural language algorithms, Nuance is looking to pair up in-car systems with sensors dotted around the car. This will enable the car to notice when you are running low on fuel, for example, and ask the driver if they "want to find a petrol station?". The aim is to have the car suggest the most appropriate route based on your destination, any preferences ( only stations that accept Tesco Clubcard members) and traffic.

West also explained that future smart cars will be able to process location data. If you're running late for a meeting - you can just say "tell Jim where I am" and the car will automatically send a message with your location.