An Android tablet at a bargain price. Is it too good to be true?

The 140 price might seem great value for an 8in tablet but be prepared for sub-par display, battery life and a dated version of Android.

Even businesses grade tablets like the Dell Venue 8 Pro and Panasonic ToughPad pack a 1,280 x 800 screen with a higher pixel density than the Iconia.

A brightness level of 352cd/m2 on the Acer device is not bad, but it's poorer than every rival we've mentioned here.

The black level of 0.33cd/m2 is better, and it makes for a reasonable contrast ratio of 1,066:1 - not as good as the Venue, but better than the iPad and Nexus devices. Black levels are deep but the rest of the panel isn't as bright or as vivid as its rivals.

The 4,000mAh battery is smaller than the units inside the Apple and Dell machines and this translates to a shorter uptime. We set the screen brightness to 75 per, turned the Wi-Fi off and looped a video to measure battery life.

The Acer lasted for six hours and 32 minutes, four hours short of the Venue and half the longevity of the iPad mini and Nexus 7. Only the Panasonic, which has a smaller battery and a hungrier processor, returned a poorer result. 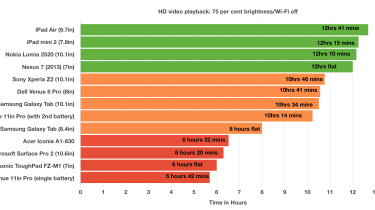 The Iconia's Intel Atom processor is an unusual addition to an Android device. Using the chipmaker's Bay Trail architecture, it's clocked to a reasonable 1.6GHz, and it's got a 400MHz graphics core.

Rivals have more powerful hardware: the Venue has a quad-core Bay Trail chip with faster graphics, the Nexus 7 also has quad-core silicon, and Panasonic has fitted a Core i5 part to its ToughPad. The Acer's CPU is paired with 1GB of RAM - the same as the iPad, but less than the Dell, Panasonic and Nexus devices.

The microSD slot supports up to 32GB of additional storage. This is welcome as the Iconia has just 16GB of internal space (11GB usable). Elsewhere, there's 802.11n Wi-Fi, Bluetooth 3 and no option for mobile broadband - a mediocre selection when it comes to connectivity.

The back houses a 5-megapixel camera, but we wouldn't advise you use it for any sort of serious photography. The shots are grainy, colours lack vivacity, and entire shots were dark and dingy.