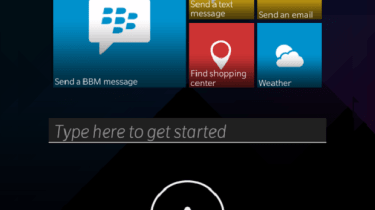 BlackBerry has announced details about the voice assistant feature it's planning to introduce through the release of its BlackBerry 10.3 operating system.

The next version of the BlackBerry OS is due to make its debut on the firm's innovativePassport device, and will feature a reworked user interface, messaging capabilities and productivity features.

Users of the software can operate the BlackBerry Assistant using voice or typed commands, and it's designed to adapt the way it responds to people the more they use it.

In a blog post, announcing its arrival, the company said the assistant will be able to help users out with a range of tasks from searching through emails, to managing social networks and sending out invites to people.

You'll be pleasantly surprised at how accurate BlackBerry Assistant is.

"The more I speak with it, the more tuned-in to my queries it gets," wrote Donny Halliwell, the editor of the firm's Inside BlackBerry blog.

He also used the post to take a swipe at the firm's rivals, Microsoft and Apple, who have both rolled out voice assistants for users of their respective mobile operating systems.

"If you've had experience with other smartphone-based personal assistants, I think you'll be pleasantly surprised at how accurate BlackBerry Assistant is at recognising your requests."

Through the use of Bluetooth connectivity, users can also sync the device to their cars so they can carry out tasks on their smartphone without taking their eyes off the road, added Halliwell.

One of the standout features of the software, he claims, is that it carries out its tasks without leaving the Assistant app, and there are also a number of Easter Eggs built into it for people to uncover as they use it.

"We briefly lost power [at our house] and I needed to find my way around the house in the dark. I asked the BlackBerry Assistant to Turn on the flashlight'," he explained.

"The flashlight app turned on and the screen, within the app, a switch to turn it off appeared."