Which Windows 8 tablet is the best? 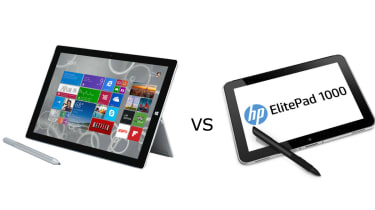 Sub-10in devices such as the iPad mini and Nexus 7 have become popular, but for optimal productivity larger screens are favoured.

Microsoft has opted for a 12in display with a unique 3:2 ratio, so the Pro 3 has the dimension of an A43 diary/notebook.

The Pro 3 has a sublime display. The 2160 x 1440 resolution means pictures, video and text are all razor-sharp. Colours are deep and it's great for display high-res images and video. We clocked the maximum brightness at 352cd/m2. And, although the screen has a glossy finish it wasn't overly affected by glare as we were able to adjust the kickstand. 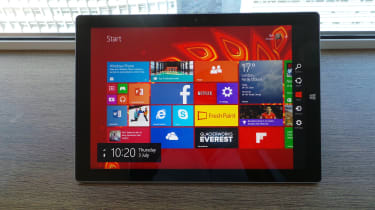 HP has used a smaller 10.1in display with a 1900 x 1200 resolution. This means it has over one million less pixels so it's not as sharp. Colours on the ElitePad appear washed-out and it's got a maximum brightness of 292cd/m2. 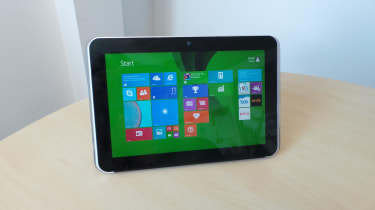 Both devices are a good size for web browsing. However, they also have scaling issues with third-party apps such as Photoshop, which have not been optimised for the high pixel resolutions.

Pen input is available on both the Pro 3 and ElitePad 1000. HP and Microsoft have crafted metallic pens to give them the look and weight of a traditional writing implement.

The pens each support 256 points of pressure and require a AAA battery. Microsoft's pen is supplied in the box, whereas HP sells it separately.

Microsoft has the edge as it has designed the pen on the Surface Pro 3 to sync with its OneNote application. Pressing the button on top of the pen opens up OneNote so you can start jotting notes straight away. Click the pen again and it will save the note and open up a new page. By giving the pen lid a double tap, you can print screen the page and then annotate it.

This is an excellent implementation, which works even when the device is locked and in sleep mode. So, for example, if you were in a meeting or lecture and suddenly wanted to jot something interesting it's possible to do so just like you had a piece of paper in front of you.

Winner: Surface Pro 3. The display is brighter with more vibrant colours and the pen implementation is the best we've seen on a tablet.