Apple Pay: What is NFC & how secure is it?

Apple launched its wireless payments system, we take a look at how it will work 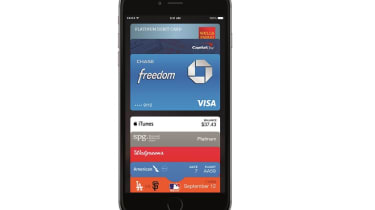 Apple Pay, a proprietarywireless payment service made its debut during the grand unveiling of the iPhone 6/6 Plus and its wearable Watch, last night.

We take a closer look at the technology to ascertain how it works, how secure it is, and find out why it took so long for Apple to launch it.

What is Apple Pay?

It's a wireless payment system that's being introduced as part of iOS 8 for iPhone 6 and 6 Plus users that will allow them to pay for goods and services using their smartphones.

Apple Pay: Fast FactsRelease date: October 2014 in the US. UK date to be confirmed.

Works with: iPhone 6, iPhone 6 Plus and the Apple Watch.

For added security, users won't be able to make a payment unless they keep their finger on the iPhone 6's Touch ID biometric finger scanner during transaction, as this will be used to verify their identity.

Hold up. What is NFC exactly?

As mentioned, it stands for near-field communications and is a set of standards that allows mobile devices, such as smartphones and tablets, to communicate wirelessly with other items when in their vicinity.

Usually, the devices have to be a few centimetres apart, or even touching, for a connection to be established and for a payment to be made.

Does that mean my credit card details will be stored on my iPhone if I want to use Apple Pay?

The device draws on either the credit card details the user has registered with iTunes to pay for goods, or they can take a picture of their credit card and upload it to Apple's virtual wallet, Passbook.

During the iPhone launch event, Apple explained that no credit or debit card numbers will be stored on the device or on the company's servers.

Instead, each device is assigned its own Device Account Number (DAN), which is encrypted and stored on the Secure Element chip in the iPhone or Apple Watch.

Each purchase a user makes is authorised with a one-time unique number using the DAN, before Apple Pay creates another single-use security code to verify the transaction.

What happens if I lose my iPhone or Apple Watch?

Nothing, according to Apple. Thanks to the inclusion of Secure Element, the vendor reckons if your device is lost or stolen, your payment details will be impossible to pilfer. But, we will see.

Does Apple Pay only work with the iPhone 6?

Nope. You will also be able to use the service to wirelessly pay for goods and service using the Apple Watch, once it's released in early 2015. This will also make it possible for iPhone 5, iPhone 5s and iPhone 5c users to use Apple Pay, if they purchase the Watch first.

Apple Pay is going to be released as a free update to iOS 8 for US-based iPhone 6 and iPhone 6 Plus users in October. At the time of writing, it was unclear if it will also make its debut in the UK around that time or later.

Where can I pay for goods and services using Apple Pay?

During the iPhone 6 keynote, Apple CEO Tim Cook said 220,000 US stores will accept Apple Pay as a form of payment from launch. At present, it's unclear how many in the UK will be in a position to.

Why has Apple introduced NFC now?

Good question. NFC functionality isn't new, and has featured on a slew of Android and Windows Phone devices over the past couple of years.

It was also hotly-tipped for inclusion in the iPhone 5s and its predecessor, but never materialised, which has left some questioning why it's taken Apple so long to join the NFC party.

In 2012, Phil Schiller, senior vice president of worldwide marketing at Apple, shed some light on this while talking to tech site AllThingsD.

During the discussion he suggested baking NFC capabilities into the iPhone was unnecessary, and wasn't something customers were desperate for either.

Instead, he flagged Passbook Apple's virtual storage wallet for loyalty cards, gift vouchers and flight boarding passes as the feature that "does the kind of things customers need today."

According to YouGov stats from 2013, Schiller's assessment of the market demand for NFC appears fair, as just 35 per cent of UK adults said they knew what the technology can do.

This figure is largely the same as the one flagged in the analyst house's 2012 report, adding further weight to Schiller's claims made at the time.

The study, which featured respondents from 1,051 UK adults, also revealed fewer than 10 per cent realised their smartphone was capable of NFC-enabled wireless payments, while 22 per cent made use of it.

The reasons cited in the report as to why uptake of NFC was so low included concerns about the heightened financial risks users fear they face should their device be lost or stolen.

Meanwhile, 56 per cent said they were simply not interested in using NFC technology to pay for items.

Apple has Touch ID and Secure Element as answers to users' security concerns, but how can it encourage more people to use NFC?

Industry watchers have been projecting strong growth in the frequency that users opt for NFC-style payments, as well as total transaction values in the years to come, way before Apple got involved. So, adoption is on the up, albeit slowly.

Apple could feasibly use its iBeacon technology, which uses location data to alert iPhone users to special promotions being offered in nearby stores, to inform iPhone 6 users that the shop they're in a shop that accepts NFC payments.

That would certainly go some way to solving the awareness issue flagged in the YouGov poll, while Apple could capitalise on this further by offering further in-store discounts to people who shun cash and credit cards to buy goods using Apple Pay.