iPhone 6 Plus "easier to repair" than Samsung Galaxy S5 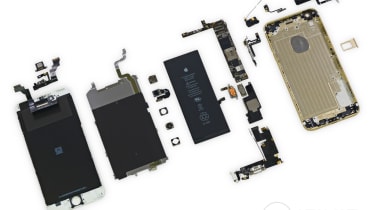 A teardown of the iPhone 6 Plus has revealed the flagship iOS handset is easier to repair than the Samsung Galaxy S5 smartphone.

The teardown also helps to confirm the 6 Plus has 1GB of RAM on-board and is powered by a 2915mAh battery (double the capacity of the 5s), which is considerably easier to remove than on previous devices.

"Continuing the trend from the iPhone 5 series, the display assembly comes out of the phone first, simplifying screen repairs," iFixit noted.

"The battery is straightforward to access. Removing it requires a proprietary pentalobe screwdriver and knowledge of the adhesive removal technique, but is not difficult."

Another key change is the re-routing of the fingerprint sensor cable so it's possible to open the device without shearing it.

On the downside, the Phone 6 Plus uses proprietary Pentalobe screws and Apple does not share repair information with independent shops and consumers.

iPhone 6 Plus vs Galaxy S5

Interestingly, the 6 Plus is easier to repair than the Samsung Galaxy S5 handset, which received a mediocre score of 5/10.

iFixit claims replacing anything other than the battery on the Galaxy S5 is difficult because the display requires removal and there's risk of damaging components.