Can this £200 Android phone match high-end rivals in terms of performance? 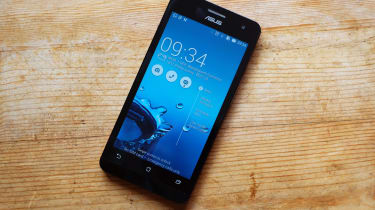 The Zenfone 5 looks promising on paper. It ships with a 5in 720p display, is powered by a nippy Intel dual-core processor, has an 8-megapixel camera and 4G all for 200. But can it outdo the cheaper Moto G?

Of course Asus has cut a few corners to save money but quality hasn't been thrown out of the window. The firm lets you choose between 8GB or 16GB of internal storage as well as 1GB or 2GB of RAM.

Our handset was the higher end model with 16GB of storage and 2GB of RAM. This spec costs 179.99 direct from Asus's online store, with the 4G edition adding 20 to the price.

The Asus Zenfone 5's back is made of plastic rather than metal, but it's not a totally no-frills affair. It's large and is available in a variety of colours including black, white, red and purple. 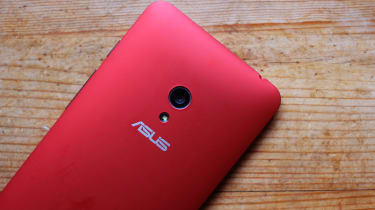 The area below the screen uses a metallic finish of concentric circles, giving the handset the same design as Asus's laptop and tablet range. Whilst the Zenfone 5 is far from ugly, it's not as beautiful or slim as an iPhone or HTC One M8.

It weighs a manageable 145g but at 10.3mm thick it's a couple of inches thicker than more expensive handsets.

Aside from basic performance, the smartphone experience hinges on the quality of a phone's screen. It's where Asus has saved some expense, by using a 720p resolution screen panel than a 1080p full HD panel.

For a 200 asking price, you can't complain. The 294ppi pixel density is not enough to provide Retina display-like sharpness, but it's not far off. In general use, the difference between 720p and 1080p at 5ins is not dramatic. 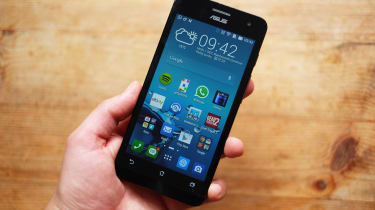 It's enough to comfortably display desktop version of websites rather than their mobile equivalents, to deliver HD-quality videos (including 1080p ones) with respectable sharpness. And it is large enough to let the Zenfone 5 work well as a little entertainment station for those who have a long commute to work.

Outdoors visibility is good as there aren't too many ultra-reflective layers or gaps in the architecture of the screen, and colours are well-saturated. The Zenfone 5 also offers the opportunity to tweak colours via its Splendid' app.

The Zenfone ships with Android 4.3 software. Android 4.4 was announced in September 2013, and Android L is set to arrive in a matter of weeks. This means the Zenfone 5 is running dated software out-of-the-box and it's unclear when it will be updated.

This is disappointing, but custom interfaces can often make up for difference in core software and Asus tries to do this with the ZenUI. 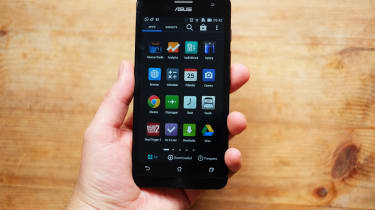 One of the best elements of the Zenfone 5's ZenUI software is that it doesn't cause any serious lag, at least on the 2GB model. General performance is swift, especially considering the phone does not have a CPU anywhere near as powerful as top-end devices.

The Zenfone 5 uses the Intel Atom Z2560, a dual-core 1.6GHz processor. Benchmarks show that this chipset is in the same league as the Snapdragon 400, a popular Qualcomm chipset used in recent phones including the Motorola Moto G, the Sony Xperia T3 and HTC One Mini 2.

The Nexus 5 and the LG G2 are far more powerful as they use high-end Snapdragon 800 processors. They cost around 80 more, though.

The ZenUI also offers a way to combat any performance issues that might crop up. In the drop-down settings menu, there's a button to try and free-up RAM. A lack of RAM is usually behind basic interface lag. We didn't need to use it as performance was solid, but the 1GB RAM version of the Zenfone 5 is more likely to suffer from interface stutters.

While Zenfones have their eye on a mainstream audience, the ZenUI does offer a few extra features for productivity tasks. Remote Link lets you use your phone as a PC controller either as a mouse, a presentation slide control or a media remote. It requires installing an extra bit of software on the PC linked to (and Macs aren't supported), but will come in handy for presentations.

In a similar vein, PC Link lets you mirror what's on your phone's screen to a TV or projector via a laptop using a standard microUSB cable. In theory it's perfect for presentations, but the software behind it needs some work. It doesn't work with computers running at 1080p resolution, meaning you need to manually alter the host computer's display resolution, which seems an unnecessary step.

Most of the other apps packed into the Zenfone 5 try to exploit connections that would otherwise not be used. Share Link is a Wi-Fi Direct file transfer client, Party Link a group share app for photos, and web storage a Google Drive alternative using Asus's own cloud storage.

There are also note, memo and to-do list apps made by Asus. While they're all intended to be transferrable between work and play uses, it seems clear the Zenfone 5 has more of an eye on the business user than the average 200 Android phone.

The Asus Zenfone 5 does not have NFC, an infra red transmitter or light-up soft keys. We only found the latter to be important, as it makes it harder to see where they are in the dark. After a while muscle memory will sort that out, though.

Battery life is average. The Zenfone 5 has a 2100mAh unit locked into the phone's structure so it can't replaced or switched out for a spare.

It'll last for 7 hours 20 minutes of video playback (MP4, 720p) or 5 hours of video streaming. In general use, the Zenfone 5 will last a solid day running off 3G, with some spare battery to tide the phone over into the morning. However, it doesn't have the stamina of some of the best rivals on either side of the price scale. You won't get two days out of a charge unless you restrict background data and hardly use the phone.

The 8-megapixel rear camera and 2-megapixel front-facing camera are above average.

Exposure metering and colour reproduction are good, meaning it's not difficult to get natural-looking shots in daylight conditions. What sets the Zenfone 5 apart more clearly, though, is the number of extra modes on offer. We particularly liked the two night modes on offer.

There's a standard Night mode allows you to alter exposure settings and brightness to make low-light photos better, and a more drastic mode that lowers photo resolution to reduce the amount of noise in photos. Instead of 8-megapixel photos, this mode produces 2-megapixel ones. But as normal night-shoot photos are so grainy and low on detail anyway, using this lower-res solution often provides more satisfying shots.

Power users may find the relatively low-end processor and middling battery life limiting, but otherwise the value of the Asus Zenfone 5 is undeniable. A 4G phone with a decent 5in screen and solid performance all for 200 is rare.

The Zenfone 5 sets a standard that is unlikely to be matched by the biggest names such as Samsung and Sony this year.

A low-cost Android phone that offers a solid user experience.