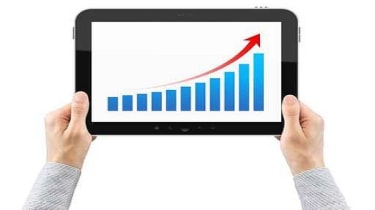 2014 will mark the start of a significant slowdown in the growth of tablet sales, as users put off replacing older devices or turn to hybrid-style ones when it comes to upgrading.

That's according to analyst house Gartner's latest PC market tracker, which predicts global tablet sales will be 11 per cent higher in 2014 than last year, with 229 million units sold. To put this figure into context, in 2013, tablet sales grew 55 per cent.

The market watcher has attributed this slowdown to the fall in demand for new iPads and Android tablets, fuelled in part by the fact end users don't seem bothered about regularly replacing them with the latest and greatest devices on the market.

As a result, Gartner predicts there will be more than 90 million fewer tablet buyers by 2018, as the length of time users hold on to their devices starts to exceed three years.

With Apple expected to take the wraps off its next generation of iPad tablets tonight, and Google announcing the launch of its 8.9in Google 9 device yesterday, the predictions are sure to make for a sobering read for tablet manufacturers.

The smartphone market looks set to fare a bit better in the coming years, with Gartner projecting strong  growth for the sector in 2014, as end users continue to snap up lower-end devices.

In particular, sales of mid-range Android devices and more basic smartphones are predicted to achieve growth of 52 per cent this year, thanks to ongoing demand from consumers in emerging markets.

As a result, the smartphone's overall share of the global devices market is tipped to hit 71 per cent this year, and will - therefore - be up 17 percentage points on 2013.

Roberta Cozza, research director at Gartner, said the analyst expects nine out of 10 mobile phones to fall into the smartphone category by 2018, if adoption continues at its current levels.

"The market is clearly favouring those vendors offering value in lower-end smartphones. This trend has become more apparent, especially in the second quarter of 2014 when most of the top Chinese smartphone vendors grew volume and marketshare," Cozza added.