Amazon is hoping to translate the success of its Kindle Fire tablet range to the ultra-competitive smartphone market with the launch of the Fire Phone handset.

Now available in the UK priced at 399 SIM-free or free from 33 per month exclusively through O2, it undercuts top Android phones like the Galaxy S5 and Sony Xperia Z3.

Amazon even throws in a 12-month subscription to its Prime service worth 79 but is the performance good enough to justify the overall price?

The design of the Amazon Fire Phone is pretty standard. It's got a 4.7in screen and is a tad bulky for its size with a weight of 160g and 8.9mm thickness.

The front and back panels are made from Gorilla Glass 3, giving it a flex-free build. Despite using toughened glass, there are concerns about durability. After a few days we had dented the plastic bumper' and scratched the back, without any rough treatment. You won't want to leave this in your pocket with a set of keys otherwise it will lose the premium look quickly. 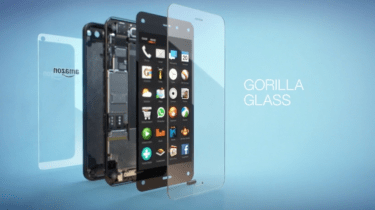 On a positive note, the inclusion of rubberised plastic, should help stop the glass panels from shattering on impact if the phone is dropped.

The unique design feature of the Fire Phone comes in the form of four front cameras. You get the feeling the device is watching every move you make but there's a less sinister reason behind this. The cameras track your head movements to provide a 3D-like effect throughout the core part of the Fire OS interface. Amazon has named this 'Dynamic Perspective'. 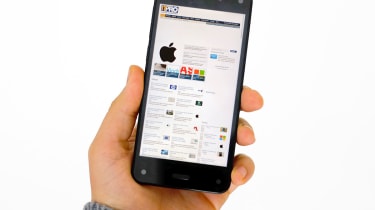 Dynamic Perspective lets users look around icons in the main interface pages by moving their head side-to-side. It provides a pseudo-3D effect on the Lock Screen and Maps app, for example. While it is neat-looking, we can't help but feel it's little more than visual gloss and something you can live without. 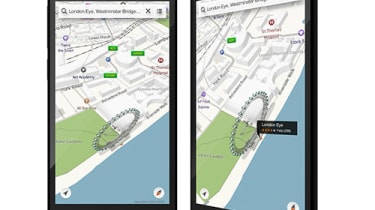 The front cameras don't have too many other practical uses at this time as they are unable to take 3D photos. This means the Amazon Fire Phone's USP is forgettable after the initial excitement.

Amazon uses Android as a base for its software, but the interface is so heavily customised it bares no resemblance to Google's popular OS.

A bespoke Firefly app allows you to scan barcodes and covers as well as identify music, with the aim of getting people to buy items online. Usefully, this also lets you scan information such as names or phone numbers and immediately digitises them. Perfect for scanning business cards and saving them into your phone. 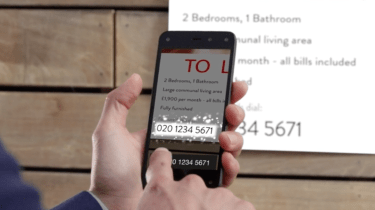 Amazon doesn't pre-load Google Play. The firm has its own Amazon App Store with over 240,000 apps. Even Google apps that don't step on Amazon's toes have been replaced. Gmail and the Calendar are switched out with sub-par alternatives. Google Maps is replaced with Nokia's (now Microsoft's) mapping app, but not all the download features seen in some Lumia phones are here.

Those switching from Android or iOS aren't going to be satisfied with these alternatives and Fire OS isn't all suitable for first time buyers either. The interface navigation is based around swipe and flick gestures, rather than actual on-screen visual buttons and controls.

Flicking from each side of the screen in the main interface takes the Fire Phone to a different submenu or notification screen, and the result often varies depending on context. What Fire OS lacks is a consistent visual language to tell users exactly where they are, and what they need to press or slide next. It's frequently confusing.

This issue continues when using Android apps. The Amazon Fire Phone is capable of running normal Android apps, but does not have the on-screen keys often used within them. To go back, for example, requires a flick up from the bottom of the screen.

It's not all negative. We like the Settings search bar on Fire OS as this finds the relevant menu when you type in a keyword. This is much more convenient than having to manually search around for the option you want.

The Fire Phone also includes Amazon's Mayday feature to connect buyers up via video chat to a customer support person with one click. They can see your phone screen, but not your face and help you with any problems. We tried the feature pre-release and it worked well, and should be able to live up to the 15 second response time.

The Amazon Fire Phone may not be the most intuitive device to use but at least professional support is readily available and saves you having to trawl Google for answers.

The Fire Phone lacks the speed of a vanilla version of Android running on similar hardware. A look at the specs show this is probably down to software optimisation of the Fire OS.

The Amazon Fire Phone uses a 2.2GHz Snapdragon 800 CPU, with 2GB RAM. The Snapdragon 800 was used as a flagship processor in phones of late 2013, so it's a capable chip. Most high-end phones now use the Snapdragon 801, which is based off the same architecture and has incremental performance improvements.

Amazon offers a choice between 32GB or 64GB of internal storage but there is no micro SD card expansion slot. However, the web giant does offer unlimited cloud storage for photos, so at least you never have to worry about deleting them.

The Amazon Fire Phone has a 4.7in screen with a 1,280 x 720 pixel resolution. Quality is respectable. The IPS LCD screen on the Fire offers decent image quality. Top brightness (590 cd/m2) is good, colours are solid and it's got wide viewing angles. 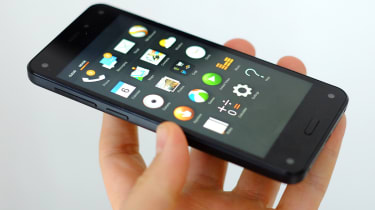 Contrast is not on-par with the best LCD screens out there but this is only noticeable in darkened rooms.

We can't help but feel Amazon could have done more at this price point. Almost all 400+ devices offer at least a full HD 1080p display. At the time of writing the LG G3 is on sale for 10 more than the Fire Phone SIM-free and its display has over three times the pixels (2,560 x 1440).

It could be argued the G3's pixel count is overkill, but you can notice the difference between 720p and 1080p at 4.7ins. Elements of the Amazon Fire Phone's 3D Fire UI show jagged edges, and at close quarters text is a little softer in the Fire Phone than it is in some of the other flagships.

Amazon has also applied its own style to the camera. The Fire Phone has a 13-megapixel camera with optical image stabilisation.

HDR, Panorama and standard shooting are all present. Lenticular is the one extra of the Fire Phone. It's a stop-frame animation mode produces animations controlled by tilting the phone or moving your head, much like a real' lenticular effect. 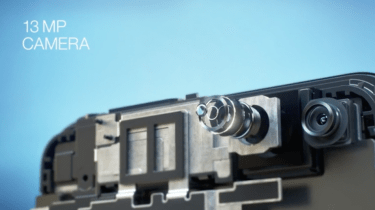 Image quality with normal photos is good. The Fire Phone's 13-megapixel sensor is capable of reproducing plenty of detail in daylight. Optical stabilisation has a positive effect in lower-light too, helping the phone to retain colour and detail.

However, it's not the every shot is a hit' sort of camera experience provided by an iPhone 6 or Galaxy S5. The Amazon Fire Phone frequently under and overexposes shots because it doesn't use a metering system to properly take into account all parts of the picture, just bits you're focusing on.

While this enables all sorts of creative lighting effects, it's not the best strategy if you're just trying to take good photos. This is something Amazon may address in an update.

The Amazon Fire Phone has a 2,400mAh unit sealed-into the chassis - so it's not ideal for power users.

When playing video at medium brightness, the battery will last for 7 hours and 24 minutes. It's a mediocre result for a high-end phone in 2014. In normal use, we still got a solid day's use off a charge, but this will need to be charged at the end of each day.

Much like the Kindle Fire tablets, the Fire Phone's primary function is to act as a gateway to Amazon's ecosystem. At times the device feels like a shopping basket masquerading as a smartphone - and one that's not built for enterprise usage.

While there are plenty of software and hardware differences between the Fire Phone and its high-end Android rivals, none really offer the meat to compensate for the usability issues. This means the device struggles to justify its high price.

The Amazon Fire Phone stands out from the Android competition, but not in a positive way. It doesn’t offer enough for power users and is going to present a learning curve for tech novices also.