A stunning phablet with a class-leading display, plenty of power & great battery life 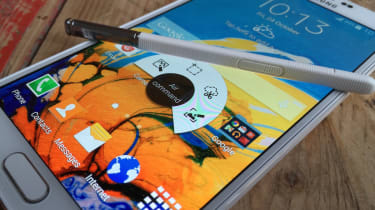 The Note 4 comes pre-loaded with Android KitKat 4.4.4, but an upgrade to Android 5.0 Lollipop is now rolling out with fixes for various bugs and other improvements (this is based on the 5.0.1 build of the OS). This also introduces Google new Material Design philosophy as well as updates to Samsung's own apps. On top of Google's software, Samsung loads its own TouchWiz UI overlay.

Multitasking is a central component of what makes the Note series great, and Samsung has modified the software. The Multiscreen feature remains but the way you access it is a little smoother. Rather than using the clunky overlay from previous builds, Samsung has integrated it into the multitasking carousel, which has itself had a bit of a face-lift and looks to be inspired by Android L.

If a running app has Multiscreen capabilities (and a lot more of them do now) then its preview window in the carousel will have a little two-box icon in the top right corner; tap this, and it'll run the app in the upper half of the display. It'll then prompt you to open another app in the lower half, and you can scroll through a list of compatible apps installed on the phone. Doubling up applications can be useful when you need to access information for an email or do research and take notes. 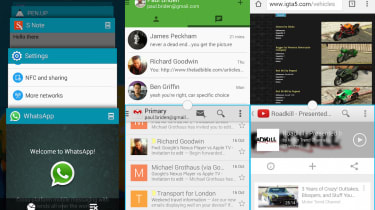 Another key pillar of the Galaxy Note is the S-Pen stylus and its productivity perks. Samsung and Wacom have increased the sensitivity to 2048 points of pressure, double what its predecessor offered.

Scribbling down accurate, readable notes and sketches is a reality with the Galaxy Note 4. We used it in place of a traditional notepad in multiple meetings and press events without any problems. When you factor in some capable handwriting recognition built directly into the keyboard and the ability to capture and write/draw/edit over any onscreen content, you've got a productivity powerhouse. The pointer is also great as it can be detected by the digitiser at just over a centimetre from the display.

Samsung has kept the Air Command radial menu, activated with a press of the pen's built-in button when it's near the display, but now the options are a little different. You still have Action Memo, which is unchanged and allows you to quickly jot down notes or sketches without having to manually open the full S Note application. 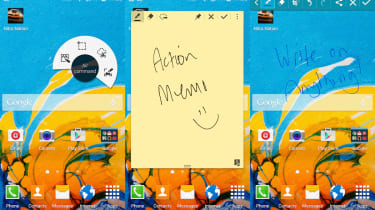 Screen Write makes a return and allows you to take a screenshot, then doodle, edit, crop, and share it. Smart Select involves dragging a box shape around what you want to capture, which you can then share or add to a Scrapbook. Meanwhile, Image Clip allows you to freehand lasso' content and you can then change it into a variety of preset shapes, share it, or Scrapbook it.

It's disappointing to lose the "Pen Window" feature from the Galaxy Note 3, which allowed you to overlay small applications such as the calculator and further the already impressive multitasking. Samsung continues to offer a few customisation options to the UI, including two layouts for the Settings menu and a selection of homescreen transition animations.

The Galaxy S5 was the first Samsung device to sport a built-in heart rate monitor and the Galaxy Not 4 follows suit. The sensor is right next to the camera. While this is a nice touch, it doesn't seem to be of any practical use as this device is not something we would imaging using while exercising.

The Galaxy Note 4 only comes in one storage model with 32GB of onboard space and microSD support for cards up to 128GB. However, this should satisfy most users.

The handset sports a rear-facing speaker, which is reasonably loud and clear, but it's by no means the best speaker setup on the market. A front-facing stereo speaker would have improved things significantly, as proven by HTC's One devices.

It's fully 4G capable and also features your usual connectivity options such as dual-band Wi-Fi with Hotspot, Wi-Fi Direct, DLNA, NFC and Bluetooth 4.1. There's a nifty Download Booster (in limited regions) allowing users to combine Wi-Fi and 4G connections to turbo-charge large downloads. On top of that there's A-GPS/GLONASS for location data, MHL3, and microUSB. Native Android casting capabilities are supported, and there's an infrared blaster for controlling TVs.

Processing power is provided by a Qualcomm Snapdragon 805 quad-core chip based on the Krait 450 core architecture. It's clocked at 2.7GHz and carries 3GB of RAM plus an Adreno 420 graphics processor (GPU). General operation is incredibly smooth and the handset doesn't skip a beat even if you're using the S-Pen for extended periods or Multiscreening multiple applications.

The Note 4 helps Samsung to retain its position as the best phablet maker on the planet with the large display, stylus and excellent battery life being the standout features.

At 530 SIM-free it's not cheap, but there's nothing better on the market at the moment.

The article was published on the 11/11/14 and was updated on the 24/2/15 to reflect the inclusion it the Top 10 smartphones to buy feature. It has also been updated on 17/4/2015 to include some details on the fingerprint scanner and heart rate monitor.

Simply the best phablet on the market.

Storage: 32GB internal with microSD support for up to 128GB